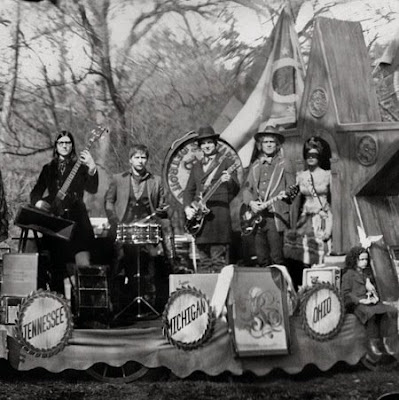 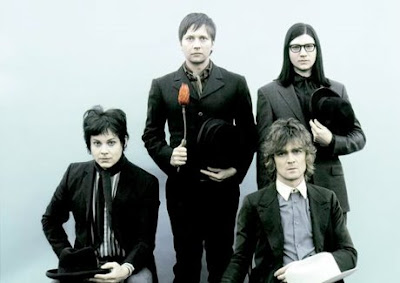 The everybodyfields – The Red Rose

(2004) Halfway There: Electricity and the South

Whiskeytown - Sit & Listen To The Rain

The Raconteurs - The Switch And The Spur

The Raconteurs - Pull This Blanket Off

The Raconteurs - These Stones Will Shout

The Raveonettes - My Heartbeats Dying

Thurston Moore - The Shape Is In A Trance

Vampire Weekend - One (Blakes Got A New Face)

The Who – Won’t Get Fooled Again

The Rolling Stones - Fool To Cry

The Impressions - Fool For You

Out on the Highway (pictures) 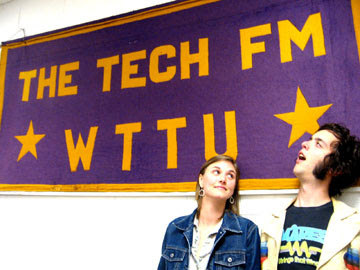 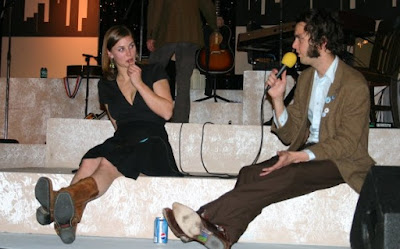 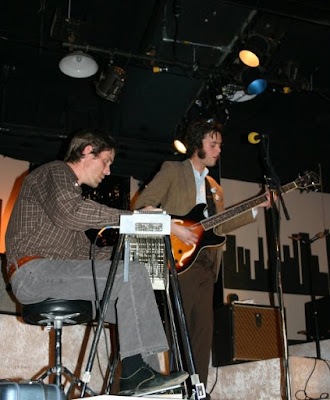 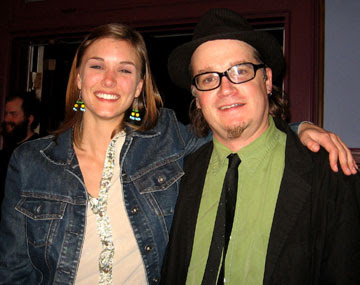 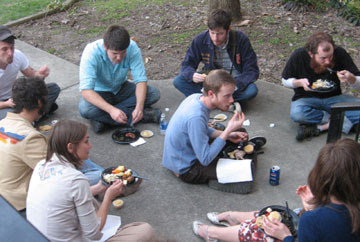 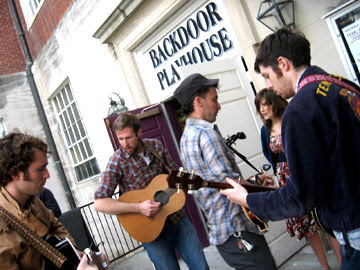 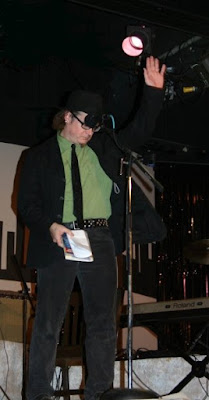 My Pang for Twang

My Pang for Twang: Reflections & Ruminations on America’s Beautiful Contradictions from an Alt-country Fan

prepared for a talk at “Out on the Highway: An Evening of Americana”

The theme of tonight’s event “Out on the Highway” is taken from the everybodyfields song that closes the absolutely amazing Nothing is Okay; the lyrics to this song, printed on the back of your program, could easily stand in for this music critic’s chatter as poetic definition of Americana.

(I am wearing many hats tonight—fan, scholar, writer, speaker. But a warning and disclaimer about us music critics—beware. Be forever suspicious of the music critic because we are pencial and typewriter and word-processing prose people, penning essays about something we love but do not practice.)

My appreciation for is less about American myth in the baseball and apple pie sense and more about an American mythopoetics, a conscious construction of new stories to shed new light on old topics. (The term mythopoetics has its etymology grounded in Tolkien, who coined the term in his poem “mythopoeia,” which he wrote to CS Lewis—then an atheist—in 1931).

“Out on the Highway,” then, fits our definition of American mythopoetics and touches on a larger metaphor of mystery and magic: the American road. As Sam sings, “the smell of liquor and gasoline.” Think about the stories of Jack Kerouac o r the songs of Ramblin’ Jack Eliot. Conjure images from movies like Easy Rider, Thelma and Louise, or Into the Wild. Imagine truck drivers watching the sunrise from the roadside to members of the RV set setting out for or a national forest. Or even consider the unwashed masses, from hitchhiking hobos to hippies on summer tour. Whatever picture we paint to accompany this sound, roots music is often rooted in the rootless seduction of the road.

O highway I travel, do you say to me, Do not leave me?

Do you say, Venture not—if you leave me you are lost?

Do you say, I am already prepared, I am well-beaten and undenied, adhere to me?

O public road, I say back I am not afraid to leave you, yet I love you,

You express me better than I can express myself,

While I wish to speak about the musical genre on which this evening’s festivities are focused, I cannot do that in any traditionally textbook sense. Rather, I approach inspired by the great American rock writer and cultural historian Greil Marcus and his approach to rock and roll in Mystery Train and punk rock in Lipstick Traces. This work, as Marcus suggests in Mystery Train, is to “broaden the context in which music is heard” (4).

In this sense, we face genre as an impossible and necessary beast—building boundaries around that which cannot be bound.

The hosts of an radio program on the station in grapple with this thorny dilemma directly and eloquently. They write, “To define music as a genre is to take a very narrow view.” This evasive but impressive stance guards against the nitpicking, hairsplitting, and internet turf wars that serious music fans too often get trapped in.

The webzine Americana Homeplace recognizes that “there is really no consistent use of the term,” but writers there take an admirable stab at carving out a definition of the musical genre.

This interpretation of “What is ” offers the following helpful markers (and these are quotes):

· Another common characteristic of is its rural roots. Most styles originated or developed in rural . Whether it was the Appalachian home of bluegrass, the home of the delta blues, or the bayou home of cajun and zydeco, all of these styles share a common rural ancestry.

· First, all of these styles exist to some extent outside of the commercial mainstream of popular music. In fact, to many fans, is synonymous with "non-commercial."

Scott Greenberg, host of the “Debts No Honest Man Can Pay” program on WGWG in North Carolina takes some exception to the non-commercial position, claiming, “Americana is a marketing term that kinda bugs me...I prefer to refer to it as roots music.”

Apparently, there may be some basis to this assertion if we were to look at the website of the “professional trade organization” known as the Americana Music Association. In the video presentation “how to deliver new dollars and demos,” we see the marketing mix in its most stripped down and shameless form; according to the sales-pitch, Americana fans are predominately white, male, upper-middle-class, college-educated, and more affluent as a group than any other mainstream music fan base. “Whatever,” I thought, as I heard that.

Like the deejays at the radio station, I am more sympathetic to umbrella definitions of “American cultural music” and “American popular culture”—as imprecise as these may be.

Within the “alt-country” camp of this cultural music, emerged as a reaction against mainstream country—or as a friend recently described it to me, it is country music “if country music were what it meant to be.”

In The Shape of Things to Come: Prophecy and the American Voice, Marcus expounds: “ is a place and a story, made up of exuberance and suspicion, crime and liberation, lynch mobs and escapes; its greatest testaments are made of portents and warnings, biblical allusions that lose all certainty in the American air.”

In Mystery Train, Marcus describes popular music as a “democratic art” and continued to break it down this way: “[O] democracy is nothing if not a contradiction: the creed of every man and woman for themselves, and thus the loneliness of separation, and thus the yearning for harmony, and for community.”

Speaking of contradictions, my arrival to and alt-country fandom is an awkward tale at best—because, “Mr. Andy, yer not from around here are you?” A Yankabilly with urban, rust-belt roots, I’ve resided in the hills of for more than a decade. Just as some locals had their own stereotypical impressions of a book-smart, lacking-in-horse-sense, fast-talking Midwesterner like me, I had to reassure my friends back home that I had not moved to a foreign country called Redneckistan.

No, I felt about my new neighbors in the backwoods the way writer Henry Miller did when he visited in the 1940s and wrote this of the people working the land in The Air-Conditioned Nightmare: “I saw the shacks they live in and wondered if it were possible to put together anything more primitive. But I can’t say that I felt sorry for them. No, they are not the sort of people to inspire pity. On the contrary, one has to admire them. If they represent the ‘backward’ people of then we need more backward people” (34).

The early years of transition were hard, and falling in love with our regional musical traditions eased the bumpier parts of the ride.

Hearing the echoes of the past in this present, perhaps “old really is the new new.” I know that I have always loved music that predates not only the iPod but the phonograph, and this is music that will outlast all flavors of potential and predicted catastrophe. As much as I appreciate experimental electronic dance music composed on a laptop, it frankly lacks the elegance and endurance of banjo, fiddle, and guitar.

For me, getting this music is like getting religion, getting the holy spirit with some occasional help from the home-made spirits, like the moonshine mentioned in the lyric to “Out on the Highway.” However we name it, this music makes meaningful modern myths about our home (and has made me feel more at home in my adopted home).

Our pang for twang is in our bodies as it is in our spirits as it is in the ground, in the sleepy hollows and dirt. This is a different kind of American pride, described by the late great maverick nature writer Edward Abbey as “immense and inordinate with a profound and swelling love of the physical land, of the towns and farms, of the many folks I know” (11). The groups playing tonight offer a vast emotional vocabulary of a similar swelling and intoxicating immensity. And I know you really came to hear Jill, Sam, Josh, and Tom, so I will leave the stage for them.

Abbey, Edward. Confessions of a Barbarian: Selections from the Journals of Edward

——. The Shape of Things to Come: Prophecy and the American Voice. ,

Posted by Teacher Preacher at 9:06 PM No comments: 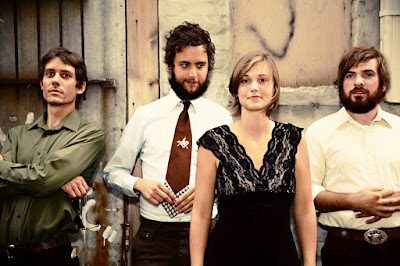 Robert Johnson - Me And The Devil Blues

The Band - Key To The Highway

Nickel Creek - Out Of The Woods

Nickel Creek - Jealous Of The Moon

the everybodyfields - Dont Tern Around

the everybodyfields - Out On The Highway

Lone Justice - This World Is Not My Home 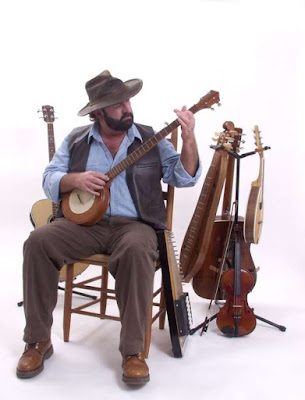 Teacher on the Radio guest hosting of "The Band Next Door" for St. Patrick's Day (7-8)

Eoin Dillon - The Moon On Me Back

The Chieftains - Lots Of Drops Of Brandy

The Dubliners - Whiskey In The Jar

The Dubliners - The Pub With No Beer

The Pogues - The Irish Rover

Flogging Molly - Man With No Country

Bruce Springsteen - Eyes on the Prize

Doc Watson - Down In The Valley To Pray

The Carter Family - Will You Miss Me When Im Gone

John Jacob Niles - From My Window

Hank Williams – I’m So Lonesome I Could Cry

The Brothers - Ramshackle Shack On The Hill

Jim Clark LIVE in the studio

Gram Parsons - In My Hour of Darkness

Bob Dylan - The Ballad Of Frankie Lee And Judas Priest

The Band - The Night They Drove Old Down

Teacher on the Radio Field Trip: Black Mountain at the Grey Eagle 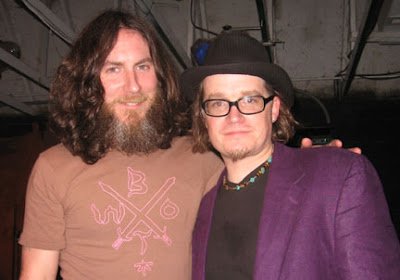 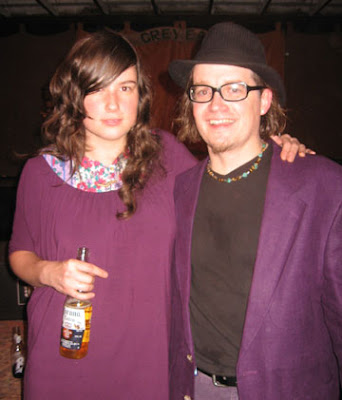 We were there! See the story at

http://realitysandwich.com/black_mountains_prog_gnosis
Posted by Teacher Preacher at 5:17 PM No comments: 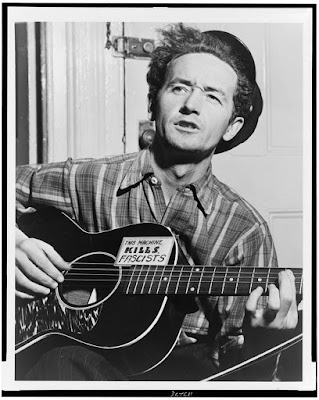 Ani DiFranco - This Land Is Your Land

Phillips - We Have Fed You All a Thousand Years

Natalie Merchant - Which Side Are You On

The Incredible String Band - Swift As The Wind

The Fugs - You Cant Go Into The Same River Twice

The Holy Modal Rounders - Blues In The Bottle

Elvis Perkins - The Night & The Liquor

David Rovics - Here at the End of the World

Posted by Teacher Preacher at 5:16 PM No comments: