Something In Common: Hanging Loose & Holding On with Dawes & Alabama Shakes 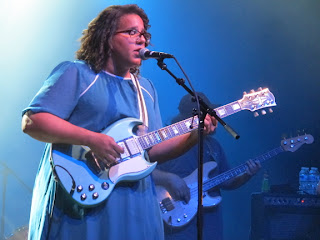 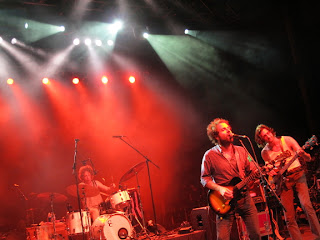 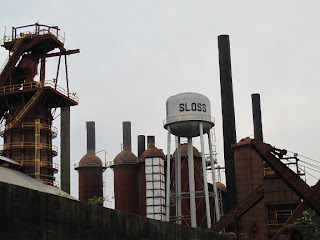 In their incredibly short career to date, Alabama Shakes have redefined American popular music through abiding by its pure definition, that is, by maintaining without explaining an always already impure mojo rising and slow cooking hybrid of the holy and profane.

When I drag my literature courses out of the canonical books and onto the back forty of cultural identity, we always listen to American roots music, to see the dark and light shades of musical production stirring up the profoundest poetry wrought by blues and bitterness, informed by skin and sin, taught by love and light, merging day and night.

Alabama Shakes are not the first in modern rock but only the most recent, rugged, and robust to anchor roots music in its deepest and truest roots, at the dusty, dogged, and divine intersection of gospel and blues that gave birth to its eternal bastard child called rock’n’roll. Gregarious glimpses of Janis Joplin, Mavis Staples, and Sister Rosetta Tharpe have infected your sound card so the digital age will always have an analog heart.

Epic relic of the American south’s industrial age, Birmingham’s Sloss Furnaces National Landmark boldly poses the perfect contradiction of beauty and grime, recalling an era of haughty bosses and hungry workers, of timelessness inside time. Whoever first had the notion to host rock shows here had the right idea.

Alabama Shakes are not just a band name but a regional brand, and an early summer home stand on this particular plot of land was destined for sold out crowds. We only found out about the Saturday show with our beloved Dawes as opener after all the tickets were gone. Sucking in practicality and pride, we participated in a trade of cash for tickets on StubHub. We don’t regret that decision.

A muggy Saturday mostly covered in clouds gave way to a balmy and breezy evening. We got there early enough to stand in the second row, and we would spend hours standing, yet the sounds in our ears soothed the soreness in our feet. An extra opening band broke the veil of anticipation and delayed our ultimate transformation.

Taylor Goldsmith didn’t care that this might not be his crowd and warmed us quickly, warning us and then relishing the references to Birmingham in “That Western Skyline.” The bandmates are scruffy but in a cute California-muppet kind of way, tight and rehearsed in their rendering of tracks from all three albums, including the current Stories Don’t End.

Vivid lyrics cram the night, but where Brittany offers sparse blues poems on primal topics, each Dawes track could be a sonic novella, narratives brimming with odd characters meditating on the meaning of the human condition. Dawes had no problem connecting with the crowd, as many folks were there to see them as well as the Shakes.

The next night, Dawes would hold headliner status for their first Ryman Auditorium show, where the singer confessed he felt more as the fan, just like us. A 45-slot stretched to two hours with even a few jammy diversions. Deeper cuts from the new album Stories Don’t End revealed again Goldsmith’s gravity as a Paul Simon-or Jackson Browne-quality poet-lyricist. They picked up the pace on the track “Something In Common,” and the line “It's not faith that comes from miracles, but miracles that come from faith” hit the heart as a momentous reminder. Surely, Dawes and Alabama Shakes have something in common in their timeless, classic approaches that invoke a 60s and 70s feeling with falling into a trap of anything remotely gimmicky.

For some reason, a warp in time transpires at concerts. The actual sets of bands always seem to fly by, to be over just as soon as they start. But the time of waiting between sets can seem treacherous. The wait for Dawes passed quickly, but then the wait for the Shakes dragged on.

Brittany’s ability to just belt it like she felt it dispels any disdain about the level of authenticity she might maintain. The toughness of her commanding stage presence gets tempered by the tenderness of her lyrics and vocals. Brittany and band can speed it up just fine, but they also know how to slow it down. The compliment of charisma gets easily bestowed, but this is a gift that Brittany gets as she moves her body and brings her vocals.

Even at a show as loud as this, we wondered if she even needed that mic which she held at almost arms’ length from her face. Each time she opened her mouth, a rowdy hymn rolled, sacred music despite itself, a blues wallop about him or Him or everyday whim.


Both Alabama Shakes and Dawes are bands you can get serious about seeing more than once. Certain songs—on repeated listens at home or in the car or finally at the show—stitch themselves into the quilts of listeners’ lives. Those special tracks can tempt and hurt or heal and teach, such as reality spills from the speakers and into our souls through our earholes.

Scrolling online (at http://offtherecordmagazine.com/) through an image gallery of Alabama Shakes show posters, I noticed a handful with religious allusions, with pictures of a church or one going so far as to compare attending an Alabama Shakes concert (and I would extent the analogy to Dawes) with “going to a rock’n’roll church.” I couldn’t agree more.
Posted by Teacher Preacher at 8:53 PM No comments:

Adventures In Your Own Backyard (TOTR 202) 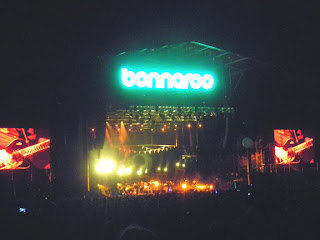 It’s past time to plan and almost time to roll from the annual axis of anxiety and anticipation, past preparation and into celebration. It’s the sensational and sweaty secular summer holiday of the midsouth. It’s the perennial June jubilee known as the Bonnaroo Music and Arts Festival in Manchester, Tennessee.

Featuring a tantalizing top bill of Tom Petty, Mumford & Sons, and Paul McCartney, Bonnaroo doesn’t stop with big gigs, as those with the most name-recognition are matched by the mass diversity of talent down the poster from there. Each spring, curious and determined fans can study the schedule and its array of stages to discover nuggets they didn’t expect and new acts that could change their listening experiences for the better and forever.

The following playlist contains all my favorites from the upcoming festival, from people I have been excited about seeing since the lineup dropped, from artists who are rock-solid pop pillars to those recently-discovered rising thrillers. The songs coincide with the chronology of the weekend, synced to a hypothetical itinerary, granted that no fan could see this many shows easily and that some must-see sets are inevitably booked against other must-see sets. After a brief intro from me, tap the buttons to play and kick back with two hours about an upcoming adventure in our own backyard.

Posted by Teacher Preacher at 6:21 AM No comments:

College & community radio since 2007. Live Podcasts on Facebook live, Saturdays at 11am CST. Reviews, rants as well. Returning to live radio on 88.5 FM Cookeville in early 2021.