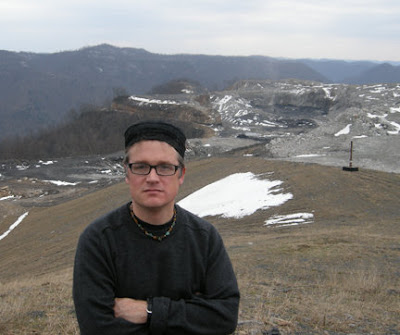 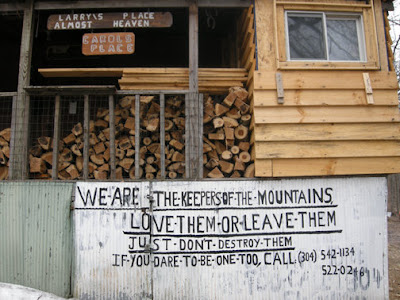 The floodwaters lapped at the wheels of our Ford Escape as we left West Virginia early in the morning on Saturday, March 13. As meaningful as our experiences had been, we were still glad to be leaving the dramatic rivers & mountains & valleys that had been our home for a week.

Most of our time was spent with our crew, an all-ages collection of willing & well-meaning souls from Cookeville, living inside a beautiful old church in the Kanawha River Valley. We ate together each evening & some read books or played cards at night before an early bedtime, but by day, we worked rehabbing trailers for locals in need.

Standing in the back of one holler on a beautiful early March morning, I instantly watched the last 14 years of my life flash by as I visualized the hollers of Tennessee & the rural life I'd recently left to live in a college town full time. For some work groups, understanding the cultural contexts of rural appalachian poverty requires a kind of tolerant patience & careful orientation. For me, the distance between backwoods Tennessee & backwoods West Virginia proved unnervingly immediate.

My job that morning in a strangely familiar place was pulling rusty staples & nails & rot—the kind of deliberate deconstruction I'd defiantly denied myself at home for most of the last decade. While I felt a strange guilt for never having fully repaired or renovated a rotting cabin on my old communal property, dealing with this gritty labor prompted even more feelings & thoughts of a more personal nature.

In the depth & dirt of a decaying window frame, I faced some rot inside my mind, shame still contaminating my soul. But thanks to the spiritual work I've been doing for the last ten months, I had the mettle to push on, pulling at pieces of the past with each motion of the hammer or flatbar.

In cleaning that window frame from rust & rot, I faced my internal demons of desire & doubt & turned my labors & loves as well as my lusts & losses over to the God of my understanding. In the communities of recovery from addiction, in taking our own inventories, we do for our spiritual lives what this posse of Presbyterians did for the trailers of strangers that had recently become friends.

My attitude about challenges of this nature has changed in the last year. Today, I see that God graces us with grunt work & grants us gratitude in the grime & grunge. Because I had asked to cook a couple of lavish dinners for the work crew & our local host congregation, my daily work did not include so much of the physical rehab as compared to my friends. But my entire trip to West Virginia felt like a pilgrimage, an adventure of spiritual & social rehab.

On Wednesday of our workweek, some of us took the day off to visit firsthand the evidence of Moutain Top Removal (MTR), what Erik Reece calls "radical strip mining" in the subtitle of his book Lost Mountain. Because I know that my community burns MTR coal as its primary source of power, I participate in MTR even as I write this critique, just I implicitly endorse other injustices by simply living in this society. On this trip, I desired discovery—to see with my own eyes the first-hand evidence of what has prompted a response of moral outrage among activists & citizens across the southeast.

In his foreword to Lost Mountain, Wendell Berry writes, "To know about strip mining or mountain top removal is like knowing about the nuclear bomb. It is to know beyond doubt that some human beings have, and are willing to use, the power of absolute destruction. This work is done in violation of all the best things that humans have learned in their long dwelling on the earth: reverance, neighborliness, stewardship, thrift, love."

For much of my late teens, twenties, & thirties (I'm 42 now), I invested considerable time in radical social & political activism. As a pragmatic (as opposed to dogmatic) pacifist with a spiritual inclination, much of my activist work was invested in the anti-war movement & included periods where I was devoted to direct action. Today, I consider myself retired from that movement but still have many contacts from those days, & one of them is now living in the Coal River Valley of West Virginia with the explicit mission of getting arrested to stop MTR. I'm thankful that he invited us to visit.

While I am deeply saddened by what I see as the moral & tactical mistakes of the environmental direct action movement overall, this, for me, does not eliminate the moral necessity for resistance in certain circumstances. At the same time, we see direct action movements being harassed, profiled, targeted, & generally repressed by authorities that appear to want to forever remove the Kingian option of nonviolent resistance from the strategic lexicon of American social movements. I do think some injustices require resistance. Does MTR offend you enough to motivate some kind of social or political action?

Among the Tennessee friends I visited the action camp with, we had interesting discussions about the viability of direct action. Some folks sympathetic to stopping MTR still question the tactics that groups like Mountain Justice choose. While I would not join the direct action faction of such a movement today, I understand & admire it. What bothers me is not the movement's decision to embrace blockades, treesits, & other peaceful disruptions but the spontaneous self-marginalization of anti-MTR activism as an explicitly counterculture endeavor.

As a suddenly more cleancut recent refugee from the counterculture, this is difficult to acknowledge, much less critique. But at the site of the rough-&-tumble, ragtag collective's locus of operations, the utter lack of a remotely professional public persona could overwhelm the casual sympathetic visitor & would likely offend most everyone else. The project's messy & chaotic vibe fulfills the worst stereotypes of the treehugging alternative & effortlessly risks undermining its mission.

Since the Mountain Justice movement models itself on the freedom summers of the 1960s, it seems the mountains might be worth an ethic of etiquette & sacrifice to save. While my formerly dreadlocked head cannot believe what the fingers are typing, perhaps the West Virginia mountains are worth codes of conduct at ground zero. If you are willing to give up jobs & do jail time, perhaps others efforts to improve the functioning of basecamp & provide a modest makeover to the public face of the direct action movement in West Virginia might be worth considering.

Before we departed the Coal River Valley, we took a pilgrimage to the top of Kayford Mountain. At this summit, "keeper of the mountains" Larry Gibson maintains a 50-acre camp that has become a destination to see the damage of MTR. On family land that has been with Gibson's people since the 1700s, his ancestors are buried. Today, his land & folk are attacked & harassed by "drive by shootings, thugs threatening people’s lives during our family reunion, & other forms of violence."

While it took us awhile to get there, climbing Kayford mountain was worth the meandering roads & emotional incline. "Epic" cannont describe the grand contrast that awaited us there. From one summit, we saw saw the beauty & bounty of God's glorious creation unfolding before us in all its dramatic magic. From the same site, we witnessed the grim gravity of unchecked human greed in the grotesque mechanical destruction of divinely created peaks. I could not claim any moral high ground even as I stood at high ground; today, I am using coal to compose this piece & seek an elusive peace in the war raging in appalachia.

When I returned to church to face a fierce debate with one of my local hosts concerning MTR and the "outsiders" committed to stopping it, I had a hard time imagining an end to MTR before every mountain is destroyed & every ounce of coal is burned. The contrast of local sentiments in the Kanawha Valley & the revelations of my truth-seeking side-trip to Kayford Mountain & the Coal River Valley routed my soul with a rude gust of the rhetorical winds blowing through Appalachia today. The rhetorical & moral & poltical divides are as vast & auspicious as the mountains & valleys.

My moral queasiness with both the raped mountaintop & its unwashed defense committee still haunts me. Today, I cannot engage in the false dilemma of pitting one good cause against another, of being expected to choose between serving the poor & saving the planet, especially because I see a deeply spiritual component to economic justice & environmental justice. The intrinsic moral & majestic value of a mountain cannot be defined by a human economy & neither can the value of human labor & ingenuity be flattened by misty platitudes.

Only a cosmic economy of revolutionary spiritual values could bridge this chasm. Only when the defenders of coal mining & the defenders of mountains can meet at the table of humility does our culture & our country have a chance. Only when we see God in the mountains as well as in the man who mines them will we begin the painful work of peace. Until then, we will fight & pray while the machines of might continue to ruin our moutains as prey.

Resolving the crises of the 21st century—if they can be resolved at all—will be like climbing Kayford Mountain: getting lost along the way before the slow going, climbing against steep angles on slippery paths with plenty of mud & music & dirty water. The dirty water of West Virginia cleanses & challenges my muddy spirit as I still insist on singing the songs of hope for an "almost heaven" facing its own forms of a living hell.
Posted by Teacher Preacher at 11:34 AM

I think you did a pretty swell job creating this experience for those that were absent. I'm forever grateful to have been a part of this trip, and I hope that humility comes soon for us, as it may be our saving grace.