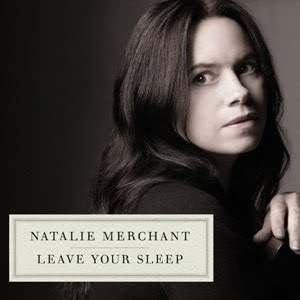 As parents, we tend to embarass our children. What was perfect when they were younger seems strange when they reach the teenage years. I doubt my 16-year-old daughter relishes her baby pictures being incorporated into undergrad lectures or having me forever reviving a chant poem about her first words uttered in 1994. Imagine then, having your pop icon mama composing an expensive and expansive 26-song album in your honor. But that's just the artistic blessing of being born Natalie Merchant's daughter.
Released on April 13, Leave Your Sleep dances into our waking dreams as the kind of epic project that only a unique literary and musical genius on extended maternity leave could compose. Costing thousands and thousands to produce and involving hundreds of collaborating musicians, Leave Your Sleep enchants, educates, and enthralls. Merchant confesses to finding the songs to resuscitate poems in her mind while nursing her now six-year-old daughter.
“I was breastfeeding six hours a day, and I felt this burst of creative energy,” she explains in an interview. “In my mind I had all these visions of projects I wanted to do and things I wanted to make, but I couldn't leave my chair, and I had my hands full. So I just put a tape recorder next to the chair where I was nursing, and I would start singing into it, and that's where the first songs came from. I didn't really have time to focus on writing lyrics.”
With a tip of the bonnet to William Blake, the album opens with Charles Causley's “Nursery Rhyme of Innocence and Experience.” Immediately, listeners know that Natalie Merchant does not confine her craft to the carseat of genres called “kid's albums.” With Leave Your Sleep, our hearts swim in a deep well of serious folk music and not a single chirpy singalong to annoy parents on long drives can be found among these 26 tracks.
The more clever tracks could border on the cute but never in a cringe-worthy way. Collaborating with Medeski, Martin, and Wood on the swingy “It Makes A Change,” Merchant marvels us with Mervyn Peake's whimsical meditations on a whale “feeling high and mighty” wearing “Aunt Mabel's nighty.” The poem “lights up the breakfast table,” and I haven't felt this good about dancing while planning the morning meal since Poi Dog Pondering's jubilant take on “Toast and Jelly.”
From turning Ogden Nash's “Adventures of Isabel” into a fiddle-fired Appalachian jam or giving William Brighty Rands' “Topseyturvey-World” a worldly ska-reggae beat, Merchant confirms the musical diversity and visionary versatility that's been embedded in her creative DNA since the earliest 10,000 Maniacs records.
With a litany of flavors to make Ben and Jerry weep and a wordplay that would amaze even Dr. Seuss, Jack Prelutsky's “Bleezer's Ice Cream” funks along to a downtown ragtime vibe. A poem about a person Merchant dubs a “badass dude,” “Peppery Man” began as an Irish jig but gets a gospel-blues treatment enhanced by the voices of the great gospel group Fairfield Four. The teacherly Merchant doesn't fancy a preacher's son but joyfully serenades “The Janitor's Boy,” a Nathalia Crane poem placed in the same room with Wynton Marsalis trumpet riffs.
While some tracks get pure injections of innocent frivolity, Merchant researched the epic release with the diligence of an unemployed English major seeking a doctoral dissertation commisioned by the heavens. The haunting treatment of Lydia Huntley Sigourney's "Indian Names" shows that Merchant has hardly lost her earnest, activist edge. In an awkward moment of her amazing TED performance, Merhchant actually scolds the crowd for enthusiasm during her final song (the earlier hit "Kind and Generous"), shutting them up so she can sing her gratitude to them more reverently.
Blogging about his daylong session cutting "Topseyturvey-World," reggae session man Andy Bassford tesitfies to her generosity and work ethic. The person Bassford describes is the same incredible woman I met while following her around the midwest between 1985 and 1987. And back in 2008, he got to play on one song of what's easily the the creative capstone of Natalie Merchant's incredible career. He chronicles:
"For some reason Natalie likes to eat at four o'clock, so we took a break and had some absolutely amazing organic food, which was prepared in the kitchen below the studio. She ate with us; no diva behavior here. For those of you who are wondering, I can't tell you that much about her despite spending two days working with her. Natalie is rather small and surprisingly pale, with dark brown eyes and prominent eyebrows. She has a beautiful speaking voice that is quite close to her singing voice. I'm sure she reads lots and lots of books. Good ones. She is easygoing on the surface and very articulate and poised; I never heard her swear, raise her voice, or fumble for a word. When we were cutting the track, she sang tirelessly. Some artists won't do this, or complain about having to do so while they are doing it. But I think it's really critical to cutting a good track. It's no accident that Natalie makes really good records. She's completely invested in the process."
(reposted from Interference.com)
Posted by Teacher Preacher at 3:23 AM