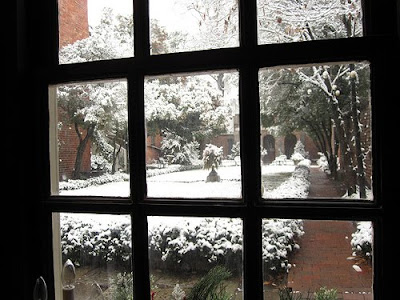 Kanye West–Lost In The World (My Beautiful Dark Twisted Fantasy, released November 22, 2010) Without weighing in on the layers of love, hate, and hype that surround Mr. West, “I'm lost the World/I'm new in the city” captures a year of much transformative transition for me where the angels and devils of reality revealed their faces oh-so-clearly.

Cee Lo Green – Old Fashioned (The Lady Killer, released November 5, 2010)In a century where old-school has felt entirely fresh, it’s hard not to get intoxicated by records that sound this timeless.

Yeasayer – I Remember (Odd Blood, released February 8, 2010) A hidden spring gurgles up tribal memories for the future, narrating liberation and romance as it goes down, outside my head and in my headphones.

Jonsi – Go Do (Go, released April 5, 2010) Euphoric Icelandic vegetarian falsetto sings in English what could easily be the anthem for my life (and also, apparently, for car commercials) on an album of sweet affirmation. “You will survive we´ll never stop wonders/You and sunrise will never fall under/We should always know that we can do anything.” May it be so! And what are we waiting for?

SufjanStevens – Now That I’m Older (The Age of Adz, released October 12, 2010) Wisps of wisdom, whispers of reflection, and in this refraction, I finally got infected by Sufjan’s vision. Impending maturity feels better by the day.

Frightened Rabbit – Swim Until You Can’t See Land (The Winter of Mixed Drinks, released March 1, 2010) An anthem and epiphany of letting go and moving on. Song still moves after multiple listens. Listen: “Swim until you can't see land/Are you a man or are you a bag of sand?/Up to my knees now, do I wait? Do I dive?” And finally: “Let's call me a baptist, call this the drowning of the past.”

Band Of Horses – Evening Kitchen (Infinite Arms, released May 18, 2010) Crafted songcrafters come crisply into cozy maturity, singing songs that linger on the soul, leaving a sweet aftertaste of truth: “And if you're ever left with any doubt/What you live with and what you'll do without/I'm only sorry that it took so long to figure out.”

Kings Of Leon – Pickup Truck(Come Around Sundown, released October 19, 2010)When I moved to the mid-south from the midwest in the mid-90s, I had no idea that our music city would become the icon of rock that it is. These kings follow the footsteps of the king and give good guilty pleasure and hometown pride.

The Black Keys – Next Girl (Brothers, released on May 18, 2010)On Brothers, the Keys get honest, and so must I: as in life, so in love, we make mistakes, and we move on. I am so glad that I too got another chance.

John Mellencamp – No Better Than This (No Better Than This, released August 17, 2010) It defies and fulfills logic that the same man who thrilled the radio with “Hurt So Good” or “Jack and Diane” some three decades ago would be a wise-and-fit elder and prophetic poet of a country-church-meets-hotel-room Americana. Go John.

Robert Plant – Satan Your Kingdom Must Come Down (Band of Joy, released September 14, 2010) Traditional and medicinal, this magical hymn makes amends and bends the narrative. Nothing against Zepheads pining for a reunion, but these Nashville-fueled folk-fusions bury the dead of that epic past with a musical dawn we all hope will last.

Laura Marling – Devil’s Spoke(I Speak Because I Can, released March 22, 2010)Forget all notions that folk this good, this haunting, and this beautiful is all pentangled up in the past. Marling moves the mountain of your soul with her sole sincerity and stunning singing.

Delta Spirit – Devil Knows You’re Dead (History From Below, released June 8, 2010) Give a man a roof and road and a lyric sheet to pen eulogies like this.Matt Vasquez visualizes with his mouth a musical truth outside time but for our times and of our time. I am honestly surprised this record has not found a wider audience and a higher acclaim.

The Tallest Man On Earth – Burden of Tomorrow (Wild Hunt, released April 13, 2010) Gritty folksinger Kristian Mattson is “carving riddles,” and we are fed when we listen.

Ryan Bingham – The Weary Kind (Crazy Heart Soundtrack, January 19, 2010) Bingham brings it on this song and on his album Junky Star. I began the year in a ball of tears in an almost-empty Nashville movie house on a weekday afternoon. We drove an hour to see a film which unrolled our lives on celluloid. This song won an Oscar for its plaintive summary of the alcoholic artist’s path. It sounds so sad, but its message is ultimately so hopeful.


Mumford & Sons – Roll Away Your Stone (Sigh No More, released February 16, 2010)On the hottest and dustiest of afternoons that would be Bonnaroo, I crammed to the front of the tent to sing this song out-loud with a few thousand other frenetic fans. Like so many other songs this year, the lyrics here say what I am thinking before I think, tapping my feelings with profundity: “It seems that all my bridges have been burned/But you say that’s exactly how this grace thing works/It’s not the long walk home that will change this heart/But the welcome I receive with the restart.”

Anais Mitchell – Why We Build The Wall(Hadestown, released March 9, 2010) Duets and collaborations remind that music is ultimately a community affair for campfires, barn-raisings, work parties, weddings, funerals, rallies, protests, and prophecies. Mitchell and an army of friends make it real for all-of-the-above-and-them-some, preachin’ it with such precise passion that we don’t mind her preachin’ about walls and how wars are never won and how poverty is the enemy.

Natalie Merchant – Peppery Man (Leave Your Sleep, released released April 13, 2010) While some critics cast aspersions at Merchant for getting too maternal and professorly on this dynamic and dissertationesqe collection, the combination of folk genres and folksy themes is anything but sleepy. When Natalie toured through Nashville and brought these songs to the Ryman Auditorium, she mentioned the powerful experience of working with our own gospel luminaries the Fairfield Four on this phenomenal track.

Mike Farris &The Cumberland Saints – Down On Me(The Night the Cumberland Came Alive, released October 26, 2010)Another great gift of the last year: further discovering rock-blues-gospel-Americana sparkplug Mike Farris and getting the spirit at the revival of his live shows.On this disc, a cast of collaborators (including the McCrary Sisters, daughters of the aforementioned Fairfield Four) and local champions take it to church (literally, in this live recording cut in a local sanctuary) to offer musical healing and Nashville flood relief.

Mavis Staples – Wrote A Song For Everyone (You Are Not Alone, released September 14, 2010) Getting “born again” (again!) as a Christian in middle agecan really alter one’s music-listening-as-meditation habits, and I am so thankful for all the great gospel that crosses-over to indy and inclusive and intelligent, making an altar of sound in my heart and mind. Mavis Staples is a grand matron of rock-pop-gospel anthems, and this new record really earns an “Amen.”

Lizz Wright –I Remember, I Believe (Fellowship, released on September 28, 2010) Following in the steps of the Staples family tradition as well as that of Bernice Johnson Reagon, Lizz Wright spins so much sweet honey to soothe the sinner’s soul with a testimony towards salvation and liberation.

Posted by Teacher Preacher at 12:58 PM