“My Hands To Learn”: Many Mumford Meanings At The Mother Church 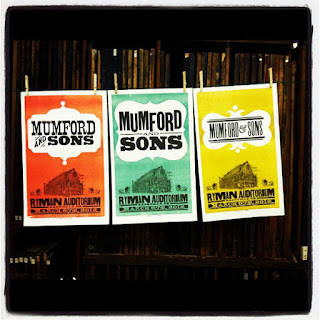 The religious implications of Ryman Auditorium gigs have long-been established, and since Mumford & Sons has essentially billed their three-night stint this early March as a kind of homecoming dance or spiritual residency, we came to our pews in the Mother Church of Americana prepared for a sonic baptism.

The first night of this “threefer” will fast fade into history, and I expect many assessments will point to a sad collision of a young celebrity’s nerves and the high expectations wrought from the band’s first visit to Music City’s Hallowed Hall. Folks might say that there was something a little “off” about this show, off for the simple facts that Marcus forgot his lyrics and fudged not one, but two, songs, and almost botched a third. But during the closing “Cave,” the lead singer begged the crowd to sing along, suggesting that if he fell to his fears we would fill his ears. And we did make a beautiful choir, coming together to belt out our part for an epic crescendo.

From my arrival at this beloved pop temple for the umpteenth time, I noticed something “off,” too, but it wasn’t even show time yet. There was no beer line. But the merch line wove around the balcony lobby like a snake. I confess I’m so jaded by people getting stupid-juiced at shows, that seeing only moderate drinkers, plenty of little kids, other middle-aged people and teetotalers like myself, and rarely anyone intoxicated—this was an added blessing to coming to church on a Tuesday night.

Opening act Agigail Washburn—a curly-haired banjo player with an angel’s voice—did something else “off”: she went off-mic for a truly acoustic version of her traditional closing number “Bright Morning Stars.” Later, the Mumfords would follow suit, taking at least two numbers to the front-of-stage for quiet, truly unplugged renditions. During the last of these—I think it was “Sigh No More”—some fans couldn’t help singing along, but they did so at such a respectful volume that it only added to the majesty of what Marcus and crew were doing on stage.

Joined by renowned dobro player Jerry Douglas, the band covered Simon & Garfunkel’s “The Boxer” before a rip-roaring “Awake My Soul.” As heartfelt-hopeful and gut-soothing sacred as the familiar tracks were, the cover and the newer songs really owned the night for me. Marcus Mumford’s fast evolution into rock god hangs on the hinge of his humility and humanity—he’s more of a “Wretched Man” (as one of his pre-Sons demos was dubbed) than a holy man.

Flubs and flaws aside, we still fly to new heights with artists who keep us on the ground. The lyrics to “Below My Feet” illustrate this well: “Keep the earth below my feet/For all my sweat, my blood runs weak/Let me learn from where I have been/Keep my eyes to serve/My hands to learn.”

How refreshing to rock out with this new folk revival that rests its reputation on remaining in reality. I don’t think Marcus Mumford was having a meltdown of the medical or medicinal nature, and he certainly wasn’t having a tantrum as some stars have been prone to throw. He was just nervous to be sharing the stage that some of his heroes still haunt. And he asked us to help him get through it. And we did.

The son of evangelical church leaders, Marcus wears his religious influences on the white, rolled-up sleeves of his lyrics. Fame might hold a dangerous “spell,” as “Below My Feet” suggests, but “But I was told by Jesus/All was well/So all must be well.” For Mumford fans in middle Tennessee this week, all certainly is well!

Posted by Teacher Preacher at 9:42 AM

A sweet rendition of the evening's events!