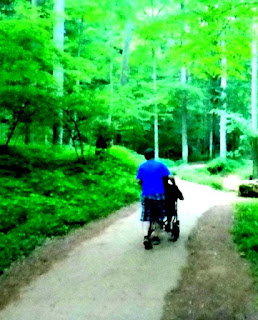 (photo by Jeannie, wheeling Daddy up the trail to Ash Cave)


I’ve got this gospel playlist ready for my Daddy’s 72nd birthday today, & I want to share it with you. And I want you to play it loud & often, sing along no matter how out of tune, & dance around the house with a blessed smile upon your face. But before we get to the tunes, I have a few things I want to say about my family, about my father Kenneth Smith & what an amazing witness he is for Jesus.

Growing up, I took for granted what a gospel-saturated ethic & Christ-soaked consciousness surrounded me at home & at church. Even more than that, I never quite appreciated (even as I somehow assimilated & ultimately adopted) the profound commitment to the details of peace, civil rights, feminism, & social justice as rooted in the Bible, in prophetic worship & witness. Essentially, my parents are what were called 70 years ago “liberal evangelicals,” faithful activist followers steeped in what today we call “progressive” Christianity, ours with a distinct mystical & contemplative bent.

Being raised in Brady Bunch pop-culture by Barbie & Ken Smith, we also had this typical all-American aspect to our upper middle-class family. But my suburban peers didn’t have parents who marched with Martin Luther King in Selma, who participated in an urban “emerging church” in 1960s Chicago that was steeped in counterculture values.

As a teenager in the 1980s, on the verge of rejecting the church for about 20 years, I cut my philosophical teeth on Dorothy Day & Jim Wallis & celebrated turning 18 with a string of arrests for nonviolent civil disobedience in anti-nuclear war protests. My Mom & Dad supported me every step of that journey into radical anti-war activism well into my 30s, & often joined me, as we went together as a family in the early 2000s to the annual witness against state-sponsored terror at the School of the Americas in Columbus, Georgia.

Although my parents were never music fans like I’ve become, their modest collection of vinyl LPs wired into my pysche the marriage of social protest & spiritual celebration. It was the 1970s, & the music of the Beatles & Bob Dylan, Odetta & Joan Baez, the soundtracks to Godspell & Hair, alongside our peripheral proximity to the Jesus People whose influence I loosely felt at church summer camp in the rolling hills of western Pennsylvania, all washed my brain with a baptism into my ultimate embrace of both my Jesus Freak and Tree Hugger identities. Moving deeper into Appalachia as a late twenty-something, I found a region of the country where both of these seeming dissimilar paths feel quite comfortable united. Now, back to Daddy.

As some of you know, earlier in this century, my avid card-playing Daddy got dealt the bad deal of a degenerative disease called Parkinson’s. Watching Mom & Dad wrestle with this reality has been just another testimony to what the love of Jesus can do when you apply it plainly & passionately to your everyday life. Somehow despite all the daily discomforts & visible symptoms that are just impossible to miss, Barb & Ken have maintained such a marvelous, grateful, & courageous attitude throughout the entire struggle to this point. And as long as Ken has suffered, he has also struggled still with an inner flame & amazing attitude, suggesting that he’s not ready to give up this fight anytime soon.

About ten days ago, we were in southern Ohio for a family reunion in the Hocking Hills. One of the most epic & majestic open-air caves in the state park called Ash Cave is accessible to all via a short, paved trail. Just before dusk after a really hot day, we rolled Ken back to the cave in his new wheelchair. I was struck by how many people wanted to smile at or greet my dad. But then we reached the end of the paved trail, where it gave way to a sandy path. Ken seemed satisfied to sit at his perch while Jeannie & I explored deeper, but a few fit & friendly folks insisted on maneuvering him in his chair further into the cave. Somehow, his smiling vulnerability only brought out the generosity of strangers.

With the Saturday’s last sunlight dipping & dripping through the trees to cast a perfect glow upon the entire scene, suddenly about 30 people of all ages marched into our view & headed directly for the dramatic overhang. All dressed in the “plain style,” it turns out they were a local Mennonite congregation. The already profoundly pristine scene got transformed again as our new neighbors proceeded to treat us (& a couple dozen other folk)s to an impromptu acapella gospel concert, enhanced by the surroundings & the subtle echo of cave acoustics.

We were blessed by heart-moving renditions of standards such as “How Great Thou Art,” “I’ll Fly Away,” & “Nothing But the Blood.” When the music ended, several of the singers immediately walked over to visit with us. Like the strangers who lifted his wheelchair just a short time before, these folks were moved by the witness of Dad’s weakness, the paradoxical power of powerlessness that’s central to not just his situation—but to our entire faith journey, to our mortality as humans, & to the Christian mystery itself. It’s that concert & those moments & Daddy’s strong spirit that sparked me in love into making this playlist for his birthday.

Posted by Teacher Preacher at 7:53 AM

Thank you so much, Andy. I loved the music and your reflections and memories. Love, Dad