"We Are The Revolution": Get to the Backdoor Playhouse for Marat/Sade (but please don't sit in the front row) 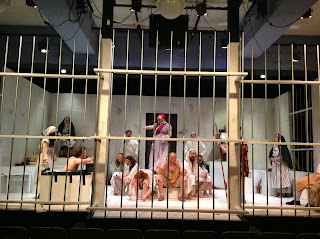 The spring production this year at Tennessee Tech’s Backdoor Playhouse under the direction of Mark Harry Creter leans towards the loony agitprop of the avant-garde. Creter seems to have devised a rotation, alternating classic, cheesy, crowd-pleasers with dark, message-oriented downers that really let the fringe-flag fly!

This year the pendulum swung too far into the perverse and absurdist territory, as though the ghosts of modernism have crawled from the 20th century into our postmodern present to push all our buttons and bomb our comfort zones.

They’re doing Marat/Sade by Peter Weiss (it has a longer, wordy, more pretentious title, too), and both metaphorically, suggestively, and somehow literally, the lunatics appear to be running the asylum. It's no accident that Technical Director Colin Forsyth put a cage around the stage. Things are just that weird.

Taking place inside an asylum, accentuated by the metal bars that separate the cast from the crowd, this play attacks the senses from start to finish. In the minutes building up to curtain time, inmates appear to lounge and fidget on the stage while some ambient Sigur Ros pipes through the theater speakers. A foreboding door at the back of the stage must open to let the rest of the cast in, making an obnoxious cranky sound.

About this time, you’re wondering why you’ve wasted 2 hours of your time and perhaps twelve dollars, too. For the rest of the night, you’ll be verbally assaulted by local acting sensations Andy Davis, David Davidson, and Josh Rapp. Only the younger Rapp (as The Herald) is fully-dressed, looking like someone who has spent too much time watching Moonrise Kingdom or Time Bandits.

Davis as Jean Paul Marat and Davidson as the Marquis de Sade duel half-naked,  hurling rhetorical barbs and verbal violence that unpack the true meanings and social criticisms of the play. Both are such fiercely capable actors and deeply creative individuals that you can really feel them indulge themselves and us with these roles, even as you wish they were a little more covered up.

There’s absolutely nothing respectable and plenty offensive and off-putting about the script. The cast’s delivery of the questionable material contains some comic relief, more than welcome given the generally chaotic macabre of the whole miserable vibe.

Frightfully, the play’s message gets to you despite yourself. You get swept-up in the 19th century rhetoric about the benefits of revolution and a questioning of religion. We somehow manage to see our contemporary world through the lunatic lens of this text and begin to question everything.

Is our everyday decency a mere façade to paste over our indecent urge to conform, submit, and generally abide by all external authority, no matter how unfair and fatuous that authority might be? Are the people in prison actually freer than those of us who walk around dutifully in the pseudo-freedom of middle-class acquiescence?

This play doesn’t fit conservative little Cookeville, which is of course why Cookeville needs this play. Creter’s visionary direction of the Playhouse continues to take us where we don’t want to go, yet once we are there, we’ll thank him for pushing us over the edge. The layers of meaning in Marat/Sade are multifaceted, but they return us again and again to some harsh realizations and heady revelations.

At the core of these swirling interpretations is the sobering but obvious observation that the prevailing social-order shows the real sickness and insanity of our world. The so-called pragmatic reality, the gross inequality of haves versus have-nots, of “power-over” others, of financial and military corruption—you know, the usual order of things—all these factors remain so outrageous that we ignore them, even though we see injustice all around.

But not everybody goes along meekly. People today in social movements describe a reality that some characters in this play suggest, where the only solution is a revolution, and as one of the members of asylum-cast declares, “We are the revolution.” We need not agree with the playwright or the characters about the exact details of such a possible (or impossible) revolution, but any person who is prescient to present reality can acknowledge the root causes of why people still call for one.

You can see Marat/Sade every day this week except for Wednesday; Thursday night is the late show. Saturday also includes a matinee.

under the Direction of The Marquis de Sade.

A play by Peter Weiss

Tickets are $12 general admission, $10 senior citizens and $5 for non-Tech students. Tech students are FREE with their ID.


Go to tntech.edu/bdph for more information.
Posted by Teacher Preacher at 2:31 PM