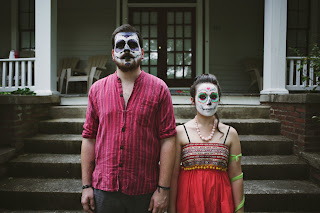 At the 2012 Wild Goose, for an afternoon set at a tent tucked away on the backwoods of the festival site, a young North Carolina band blew minds and won fans. More than just a band, more like a multicolored movement of sonic jubilee, David Wimbish and the Collection carry the celebratory consciousness, lyrical significance, and live energy that have made bands like Mumford & Sons or Edward Sharpe & the Magnetic Zeros the darlings of the current folk-pop moment.

In August 2013, the Collection will open this year’s festival on the main stage with a Thursday night-set sure to thrill us. Then, they will support Phil Madeira’s Friday night set. In the meantime, the Collection are furiously raising funds on Kickstarter for their next album, a surprisingly hopeful take on death called Ares Moriendi. I recently caught up with David Wimbish and convinced him to take a break from writing, recording, fundraising, and preparing for Wild Goose to answer a few questions.

Q. What is special about playing a festival? What makes WGF special among special?
A. Festivals are places people are willing to get dirty, stinky, messy, and crazy together to a degree they normally wouldn’t otherwise—just for the sake of connection, whether it be a connection through music, spirituality, art, or just fun. Everyone is out of their element at the same time, which makes everyone in the same element—the element of each other. So playing festivals lets people focus solely on connecting with each other; we get to talk and hang and laugh and have fun with people in a way, without the normal distractions a city or jobs or phones have.

Wild Goose Festival especially is a ton of fun because there are people searching and listening, a very diverse culture and very diverse belief systems. Last year’s Wild Goose was one of the best musical and relational experiences we’ve ever had as a band, and it’s really a gift to get to be here again this year.

Q. Why do we need to get there early for the opening set of WGF 2013?
A. We’ve got some fun surprises for this year. No spoilers yet, but the fest is about community, about connecting, about new and old ideas coming together, about seeking and experiencing, and we want to kick of the festival doing just that.

Our band always has at least a few people rotating in and out; I think every show there’s at least one new person playing with us, and it gives us a new energy to see the dynamics change in this. This year will be some new faces, some new instruments, and new energy.

Q. What will be the mix in the set from your first album, your second album, your forthcoming album?
A. We’re at that awkward stage where we know it’ll still be a bit till the new album is out, yet, we want to share the songs. I’m sure there’ll be a couple of new ones, whichever ones we're feeling the most, but we’ll be playing a lot of our favorites from previous releases. We’ve been pumped to be playing “Lazarus” a lot lately, so I’m sure you’ll at least hear that. We like to play things loosely until close to a show, so that we can feel the vibe from the folks there and do a set that feels right for the environment and band family.

The way sets usually come together is a bit like a puzzle. I go to the closet, we look and pull them out together beforehand and say "I want to do this one, I like this picture". We spread out all the pieces on the table, and we get little sections of it together, we start to see what it'll look like, and then, after awhile of moving things around, we put it completely together for others to see as a picture. So we have elements together, songs and special things we definitely we definitely have planned for wild goose, now it's a matter of finding the in between pieces and making it look like a picture. That being said, sometimes the pieces you think go in a certain spot were wrong, and you switch them out for others. So, don't want to give away too many spoilers, but we’ll play some new, and some old, and have some good celebration shoes. Bring your dancin' shoes!

Q. Everyone has a Kickstarter anymore—why should we support yours?
A. Kickstarter, unfortunately, has seen quite a bit of abuse in the last year, from super rich actors using it to raise money for a film, to someone’s younger brother trying to raise 10000 for new socks. When I FIRST heard of Kickstarter, I was excited, because it basically runs the way our band runs. Instead of charging set rates for albums and concerts, we like to let folks experience the music and then decide if they want to give or not, and how much they want or can give.

Kickstarter, in some ways, does this in a little backwards way: it allows people to say “Hey, I support this, and I'll be a part of it happening. I'll be a part of this startup, or album, or project, whatever.”

Specifically with ours, we have our good friend Luke creating a documentary of the album process. Luke is an incredible filmmaker, and seeing that documentary happen just to see Luke’s work I think would be worth it. On top of that, with the money, we want to get big string and brass ensembles, a big group of extra musicians with crazy instruments, record in incredible sounding locations across the south, and get the thing professionally mastered and publicized, all to hopefully get to people the best musical and visual experience possible. Without reaching our Kickstarter goal, most of those things won’t be able to happen with the new album. We also have tons of gifts for donations that are a lot of fun, including a lot of original artwork and things for ya!

Q. Explain the concepts behind the new album. What’s with the facepaint? Are you in part by the Mexican Day of the Dead tradition? Is that the vibe you are going for? Why?
A. I've been writing some of these songs for a few years, and started seeing themes of death in them; death to myself, death of beliefs or habits, and actual physical death. My good friend killed himself a few months ago: it was so random and crazy, and several people in the band knew him. I realized, when it happened, I've never worked through or questioned death that much. It's felt far away, and this time it slammed me in the face.

So what happens afterwards? I hope it's resurrection, in the physical and spiritual sense. At least in life, when I die to myself or things that have previously been myself, I resurrect into something new. But the crazy thing is, it's a mystery. Every religion thinks it knows; everyone has experiences they think makes them sure, but none of us know what happens. We live with it hanging over our heads, this great mystery. Mystery is so beautiful though!

But really, I needed a place to work through my friends suicide, and my grandpa dying of a brain tumor, and these songs starting coming.

And I realized, though all cultures have a time of mourning, the American culture seems to be one of the biggest ones that stops at mourning. So I was finding out more about the Mexican holiday, the Day of the Dead. There's something beautiful about celebrating the deceased's life instead of just mourning. They paint these Skulls, and it’s awesome, it takes something that we normally think of as morbid and sad, and it makes it beautiful again.

The paint is inspired by the Day of the Dead tradition. It is similar to the paint that is on the sugar skulls for the tradition and really represents both a recognition of death and a celebration of life and redemption at the same time. We want to communicate both those things simultaneously instead of separately as our culture normally does.

Posted by Teacher Preacher at 1:00 PM