Back to the Blinding Lights: U2 in San Jose in April 2005

from my personal archive; originally published on Interference! 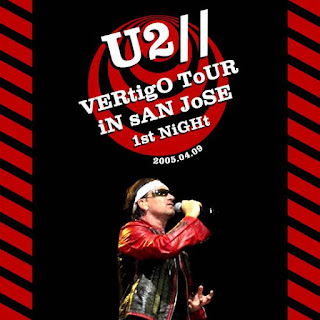 On tour throughout this year, with what’s proving to be one of the most craved and desired tickets in rock ‘n’ roll, U2 cannot imagine a disappointed customer. The elegant and earnest combination of catalog-mining dedication and back-to-basics-inspiration that defined the Elevation shows returns without apology.


An inclusive invocation of spirituality and social justice transcends rather than tramples on the integrity of the experience. As Bono illustrated in a recent short interview with NME, the new Vertigo tour comes with the character the best U2 shows have almost always possessed. "At times it was a political rally, at times it was a gospel tent, at times it was a Las Vegas show,” he told the British music magazine.


From the confetti-drenched elation of the people screaming at the opening twinkles of "City of Blinding Lights" to the teary-eyed edification of 20.000 sharing an intimate refrain of the band’s final, prayerful chorus of "40," the Vertigo tour is a triumphant moment of the arena-sized concert succeeding as serious performance art and redemptive rock ‘n’ roll.


As much as the venue and the crowd matter at a concert, the San Jose scene Saturday was lovely, with a warm and enthusiastic crowd. I cannot imagine a more Beautiful Day and night than this to see my first concert on the Vertigo Tour.


Early doubts and questions about Bono’s tired throat chakra or his overall commitment to vocal delivery will hopefully wane. If this seventh show -- two weeks into a tour that might last two years -- has any hallmark quality to make it one memory among many, it’s the frontman’s fierce devotion to wed technical performance with soulful personality, to utter every nuance and transition with the rhetorical loyalty of a radio preacher, to nail every chorus and every verse as if this were the band’s last night on stage.


Dedicated, traveling fans looking for wild and risky set list variation may feel disappointed; at least at this point in the tour, the switch-ups in song selection and sequence have dramatically settled down. The self-professed apostles of stage design may miss the experimental excess of previous projects. Fans for whom the concert experience depends on the band’s compliance with a must-hear list of songs might find fault with the increasingly solid shape the set list on the first leg of Vertigo appears to be taking. For the second San Jose show, of course, the band could launch a whole new set list, stripping this theory entirely. If a fan’s distinction between a good and great show is irretrievably linked to its degree of spontaneity, there may be reason to quarrel with the organic and elegant flow this two hour set has developed.


As preachy as the self-appointed rock prophet can be, Bono’s sermons tonight are shockingly sparse and almost painfully precise. But in his moments of ethereal ebullience and churchy evocation, the "insufferable little Jesus" is actually his most modest. The most elaborate homily came in the lucid build-up to "Miracle Drug." Pontificating about the pontiff, Bono confesses his own "pope complex" while describing his encounters with the hip old patriarch. Since we all know how the deceased father advocated global solidarity with the poor, Bono spends more of this dedication paying tribute to the man’s deep and piercing eyes.


While the white flag represented the unequivocal refusal of all nationalism, Bono’s current litany embraces an almost utopian global unity. While this message remains as moving and motivated as it is carefully choreographed during the Africa encore sequence of "Pride," "Where the Streets Have No Name" and "One," Bono complicates and challenges easy answers during the battle drums and ballistic guitars of "Love and Peace or Else," "Sunday Bloody Sunday" and "Bullet the Blue Sky."


"Bullet" is perfect example of the post-ideological tightrope Bono dances on. Over the years, this reliable crowd-pleaser has evolved from a vicious critique of US intervention in Central America to a more nuanced statement about the cost of American foreign policy. At times, it’s been about other topics altogether. Often the piece can be read as more about the religious nature of American conflict, with an almost pharmaceutical dose of Jimi Hendrix-esque guitar that reflects a tortured but still-present patriotism. This time, the tune has taken on a whole new aura: the final sequence, once an angry and haunting recitation about a preacher peeling off dollar bills has been transformed into a hymn that includes a somber "When Johnny Comes Marching Home," some of the most wickedly metalesque Edge guitar ever and a few lines from "The Hands That Built America."


Some in the old-school set might miss the younger, brasher Bono’s biting the hands that feed him in deliriously dadaesque defiance of politicians and politics as usual. Especially for those fans with political leanings to the left of John Kerry, the newer, shrewder singer as pragmatic negotiator and power-broker might come off a little lukewarm. But in his current phase of nonpartisan passion, this refusal to pledge allegiance to the left or right actually carves a space for more sustainable moments of meditation. While a favorite point of the band’s harsher critics, these self-conscious contradictions have become an expected facet of Bonoism.


But without fail, from Edge’s howling and moaning rock-god solos to Bono’s exaggerated gestures and Christ-like POW poses to Larry’s pounding, pulsing, puncturing percussion to Adam’s understated ability to keep the sound on the ground even as it soars outer stratospheres, the emotional center of this show remains connected to the riveting heart of all great arena rock.


After "Bullet the Blue Sky," the band reclaims the old-school transition into "Running to Stand Still" which fades into an almost heart-breaking series of Bono’s "hallelujahs." Just when the show looks like it’s turning into a welcome but sober late 1980s revival, the band immediately follows the universal Declaration of Human Rights statement with the fierce and Euro-funky early 1990s trilogy of "Zoo Station," "The Fly" and "Mysterious Ways."


After a long and beautiful dance with an overjoyed fan and without a break, the band leaves its most hedonistic and secular segment of the show for the three songs ("Pride," "Streets," "Oneâ€) that Bono uses to define what he believes is the defining question of our timeâ€”what will this generation do about global AIDS and extreme poverty? While communal text-messaging for the sick and starving at an upscale rock concert can come off as a tad much, even to those most sympathetic, Bono before "One" is his most painfully sincere rhetorical salesmen, asking those in the crowd with cell phones to dial in on behalf of The One Campaign. It’s hard not to believe every word. Even as this one phone call might be the most activist gesture some of these fans ever make, it’s one that might actually save lives.


While those following this tour closely will notice how much this part of the show relies on a rehearsed formula, its musical integrity surpasses the intrinsic shortcomings of the cell-phone gimmick. And this emotional section is only getting us ready for the even more sentimental encore.
Through the late 1990s, the once holy band wandered though the global shopping mall of fashion and sex and flirted with getting jaded and detached through decadent industrial music. But when the band went on tour to places like Sarajevo, Tel Aviv and Mexico City, the hope and sincerity seeped through. And to the emotional pleasure and moral satisfaction of the band’s most devoted fans, U2′s released its most overtly religious album since "The Joshua Tree."


Years ago, Paul McGuinness and other handlers of the band’s image guaranteed that these wide-eyed evangelicals avoided the Christian rock pigeonhole like the plague. Such a worry wouldn’t make sense to this latter day U2. So, from an open stage, the four men all dressed in black close the show in the manner of traveling apostles as they transform a cavernous arena into a cozy revival tent. The final trilogy combines two recent songs with one that’s more than 20 years old. The punk hymn "All Because Of You" prepares the way for an acoustic "Yahweh" and the standard coda of the old school, simply called "40."


Although I’d experienced this enchanting ritual with thousands before on both the Unforgettable Fire and Joshua Tree tours, the first time I grappled with the sentimental gravity of "40"as a show closer was watching the video from "Under a Blood Red Sky." Around that time (it was probably still 1983) I read an article in Rolling Stone where Bono compared the band to The Beatles and The Who. The cynics saw Bono’s now-trademark pomposity but laughed off the claim.


Today U2 stands alone, having long since left behind its peers in the 1980s new rock revolution. In fitting tribute to those bold ambitious comparisons, Bono channels those whose crown he’s stolen, with delicious snippets of "Blackbird" during "Beautiful Day" and "I Can See for Miles and Miles" at the end of "Electric Co.”


U2 has revived the big music of arena rock from numerous near-death experiences. Perhaps that’s too much for one man, perhaps this is too much for one band, but U2 seems up for the challenge of keeping it real and keeping it human, a fact exemplified again and again by Bono’s accessible and down-to-earth demeanor that can be see when he’s chatting up his fans who gather outside each venue early, hoping to get a glimpse of the band. If the world of pop music is a kind of musical polity, it’s a place where Bono is unashamedly pope, president, and king.


Yet because of U2′s unrelenting loyalty to the fans, and the enduring grace and power of the music itself, it’s a society we’re still willing to pay to be citizens of, if only for one (or, maybe, more) night every four years.

Posted by Teacher Preacher at 2:08 PM