What Happened at Tennessee Tech When MLK Died 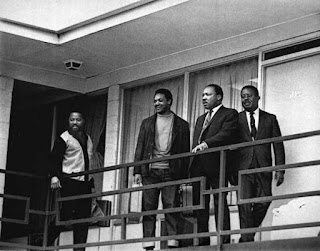 Tomorrow [this was first posted on April 3, 2018], a group of approximately 50 Tennessee Tech students, faculty, and staff will travel to Memphis to commemorate the tragic mountaintop moment, the assassination of Martin Luther King Jr on the balcony of the Lorraine Motel. Things were quite different in Cookeville and at Tennessee Tech fifty years ago.

The following is an excerpt from my manuscript Banjo and Bread which discusses counterculture Christianity through the lens of two Tech alumni, Calvin and Nelia Kimbrough. -AWS


By the time of the Poor People’s Campaign and Memphis sanitation workers’ strike, Martin Luther King’s lack of popularity among some southern whites was no secret. Moreover, his unwavering commitment to nonviolence had lost him support among more militant blacks.


National television coverage on CBS included full-color clips from King’s epic “mountaintop speech” and these remarks from President Johnson: “America is shocked and saddened by the brutal slaying tonight of Dr. Martin Luther King. I ask every citizen to reject the blind violence that has struck Dr. King who lived by nonviolence.”


Calvin and Nelia Kimbrough remember learning the news and heading to the respective TV rooms in their Tennessee Tech campus dormitories. The responses from their peers were disheartening, to say the least. “All these people were just happy,” Calvin recalls.


Then Nelia succinctly summarized what she remembers hearing: “He got what he deserved. That is what he gets, being uppity.” The poem Nelia recalls writing after the tragedy dismisses her colleagues’ cruelty. She was essentially “branding my friends as having bubblegum minds.” Among the majority white students on a campus with a very small minority population, just a few years after integrating for the first time, the scary consensus celebrated King’s demise.


Coverage in The Oracle (Tech’s student newspaper) confirmed the mood of divisiveness that King’s legacy created among whites in Cookeville. Apparently no one—from faculty to students to the community—could elude the controversies coming to the surface after the leader’s martyrdom.


History professor B.F. Jones was the target of backlash as he and his colleagues attempted to create a scholarship fund bearing the name of the slain preacher and teacher. In response to the scholarship idea, anonymous hate mail disturbed professors like Will Schrader and Jones. Other Tech faculty joined the chorus of negativity.


The Oracle quotes Schrader saying, “I am disturbed that people like this don’t have the backbone to sign their names.” Jones added, “I expected some letters like these, but I didn’t expect any from faculty members.”


Other than Bob Lewis, B.F. Jones was the Cookeville mentor most influential in changing the lives of Calvin and Nelia Kimbrough. They had switched majors to History and stayed on campus two more years to complete the Master degree, writing about African-American struggles in their graduate work. Jones’s emphasis on Black Studies really helped to radicalize these idealistic white activists. Nelia says that as much as Jones respected King, Jones had been disappointed with King’s opposition to the war in Vietnam.
But even the commander of the war (and nemesis of the antiwar activists) Lyndon Johnson could not mute his grief at losing Martin Luther King. President Johnson ordered American flags hung at half-mast in response to the murder in Memphis. The campus response in Cookeville is disturbing.
The Oracle reported, “The Stars and Stripes have not flown above the Tech campus since Tuesday after the rope used to raise the United States flag was cut for the second time.” So apparently, white racism ran so deep in the Tennessee culture that vandals would sooner deface the American flag than afford any deference to one of the most articulate dissenters the country has ever known.


Retired Cookeville journalist Mary Jo Denton was Mary Jo Johnson in 1968 and teaching freshman English at Tech as a teaching assistant. She remembers all the key players at the Wesley Foundation quite well. Denton explains, “I had earned my BA degree at Berea College in Kentucky, a school founded by abolitionists and devoted to racial equality. So even though I had grown up here in the Upper Cumberland, my undergraduate years at Berea had broadened my views considerably. Then I entered grad school at TTU and was shocked at the racist attitudes here at that time.”


Back in April 1968, her letter to the editor expressed sentiments similar to those Calvin and Nelia were feeling. In her brief remarks, Denton regretted “the air of celebration apparent in portions of the student body at Tech upon news of the death of Dr. King.”


The same mood the Kimbroughs saw in the dorm’s TV room, Denton experienced in the classroom: “I have never been more discouraged concerning my task than when my class of twenty-five people (almost unanimously) expressed hatred and racism in a discussion of the events of the past four days.”


Even though Denton has spent her life here, her younger self questioned the wisdom of working with Tech students. Her exasperation was surely shared by other Cookeville people of conscience, as she pleaded: “How can one teach the meaning and the value inherent in the concept of literature—or any other art—to people who lack elementary humanity?”


That was 1968, and I was just a baby living with my parents in Chicago. My Dad Kenneth Smith was mobilized by the Illinois Natural Guard to the patrol the streets while Chicago burned. In his ten years of service, this was the closest my father would ever come to a combat situation. But Barb reminded me that his unit did not have live ammunition during their duties.
---
[In 2021, this post is all-too relevant thanks to the resurgence of White Supremacy in our Cookeville community, campus culture, and the entire country.]

Posted by Teacher Preacher at 3:34 PM