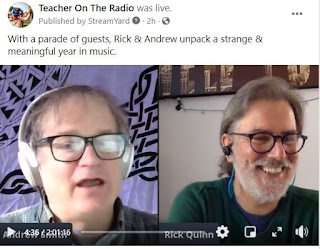 “Ordinary Takes” is based at the intersection of pop culture, theology, and social justice, but we wear those ideas loosely and interpret them inclusively.

I definitely want to drop artists and lists and playlists and maybe even discuss/debate some of these choices. But an arc that will unite us today, is the spirit-emotion-message of our music fandom practice, how pop music and headphone therapy/devotionals, helped us survive this totally strange and at times terrifying year.

This article from Amanda P, the New Yorker critic tapped this vibe:
https://www.newyorker.com/culture/2020-in-review/the-best-music-of-2020

*Homegrown is technically a 2020 release but is a previously unreleased Neil Young record from 1974-1975 written and recorded after Young’s “Ditch Trilogy” (Time Fades Away, Tonights the Night, On the Beach) and before Zuma.

:20 Amy Rock - Amy is a Nashville resident, Tennessee Tech alumni, and former radio DJ at WTTU. She loves indie rock and EDM and misses going to Music festivals and raves.

Bio As a quirky Jewish kid born into a life of irony on Christmas Eve, Scott Greenberg grew up running wild on the mean streets of suburban Detroit, raised on a steady diet of Motown, AM gold, Marvel Comics, Kiss & Creem magazine, guided only by the wit of Groucho Marx as filtered through Hawkeye Pierce.

Scott’s radio show - Debts No Honest Man Can Pay - started at WHFR-FM (Dearborn, MI) in 2003. The show moved with him to North Carolina, landing at WGWG-FM (Boiling Springs, NC) in 2006, then Plaza Midwood Community Radio (Charlotte, NC) in 2012.

There was also a brief 2 1/2-month pitstop at WLFM-FM (Appleton, WI), but that’s another story for another time. Plaza Midwood Community Radio folded in April, 2020. By early June, Debts had “phoenixed” into a podcast, thanks to some friends back in Detroit at NRM Streamcast.

Over the years, Scott’s won 4 awards from the Michigan Association of Educational Broadcasters, and was voted Best Radio Personality in the Charlotte Creative Loafing 2015 Readers' Poll.

He currently lives in Charlotte, NC, where he works as a professional copywriter.

Scott Winchell’s 2020 Musical Highlights:
* Not in order, by any means: (I could go for days, but these are some of the highlights)

Throwback:  I had several weeks-long swaths where I listened to Rush, ‘Power Windows’ endlessly.  (1985)

Scott is a proven sales professional and leader, with demonstrated success in sales & marketing development, and revenue, pricing & inventory management. He has successfully built and led numerous B2B sales teams within the media advertising world. Scott has managed the pricing and inventory of a $270 million+ advertising revenue portfolio, while working with local media markets in the sales development of local, regional and national clients. His passion for the media industry, and to help businesses through smart marketing has provided Scott with a deep understanding of all media, including broadcast, the digital landscape, and the every growing world of programmatic advertising.

Scott’s career path has taken him from stops in the broadcasting and music industries as a DJ, music programmer, artist manager and marketing pro to a successful stint in the advertising revenue side of the entertainment world.

Scott resides in Birmingham, AL with his wife Shannon and three cats.  His favorite band of all-time:  The Cult.

Songs that have been hanging out on my list for a while and will make the cut:

Other fun ones to discuss:

Becca Klaver is the author of the poetry collections LA Liminal (Kore Press, 2010), Empire Wasted (Bloof Books, 2016), and Ready for the World (Black Lawrence Press, 2020), as well as several chapbooks. A founding editor of Switchback Books, she is currently co-editing, with Arielle Greenberg, the digital poetry anthology Electric Gurlesque. She is the Robert P. Dana Director of the Center for the Literary Arts at Cornell College and lives in Iowa City.

Steve Stockman has been involved at just about every level of music. He has managed, booked bands for the Greenbelt festival, hosted a radio show on BBC Ulster and is a regular reviewer on his Soul Surmise blog. He has written two books, Walk On; The Spiritual Journey of U2 and The Rock Cries Out; Discovering Eternal Truth in Unlikely Music. In 2020 he found himself leaning on the familiar artists like Springsteen, Dylan and Tom Petty and all his new discoveries being Northern Irish artists like Joshua Burnside, Malojian, Arborist, Kitt Philippi and Our Son Krypton. By day Steve is minister of Fitzroy Presbyterian in Belfast, N. Ireland.