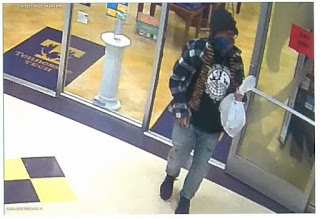 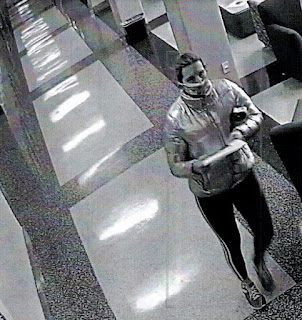 On Thursday, April 15, two tenured Tennessee Tech faculty members--Julia Gruber (associate professor, German) and Andrew Smith (senior instructor, English and Religious Studies), with more than 30 years of university service between them--received notification that they were subject to disciplinary actions from the university for what they believe is protected free speech activity: the creation, printing, and distribution of a leaflet denouncing a racist colleague, and local elected GOP official, and the members of the organization he leads, the campus chapter of the national hate group, Turning Point USA (TPUSA).

According to the official memorandums from Human Resources interim associate Vice President Greg Holt and the Vice President for Planning and Finance Claire Stinson (Holt’s supervisor), the university alleges that Gruber and Smith created and distributed the flyer with the intent “to harass, intimidate, and threaten not only Complainant but other faculty, staff, and students whose views and opinions” are “contrary” to theirs. Both Gruber and Smith decry such deceitful characterization, since calling out racism is precisely intended to curtail the culture of harassment and intimidation they believe that racists have created at Tennessee Tech, through groups like TPUSA and others.

In his official response to these memorandums, Nashville employment attorney Robb Bigelow, who represents Gruber and Smith, disputed the facts and legality of the University’s case against his clients. To begin his response, Bigelow writes, “A number of reasons exist as to why this decision should be reconsidered and that the matter against my clients should be dropped.” Specifically, Bigelow explains how Tech's "Investigation Memorandum" regarding Professors Gruber and Smith fails to even mention (let alone fully address) the First Amendment and how it ignores or misinterprets many facts and Tennessee Tech's own policies.

As popular and award-winning faculty, Gruber and Smith have always put their students first and view their social justice work as integral to the mission of any university: the pursuit of truth and contribution to the common good. Just as their accuser is an adviser of conservative student activists, between Gruber and Smith they advise or co-advise the Tennessee Tech chapters of: Lambda Gay-Straight Alliance, NAACP, College Democrats, Presbyterian Student Association, and Student Environmental Action Coalition. Does TPUSA afford the students of these organizations with the same free speech rights that they seek for themselves?

To be clear, Smith and Gruber called out a colleague’s documented racism on a flier, a traditional and protected free speech activity. Their accuser went to the campus police to get Smith and Gruber fired. Which action is in fact more threatening? And why does Tennessee Tech appear to have taken up the cause of TPUSA in this case? As tragic as it would be for these admired academics to lose their jobs at Tech for hanging a flier, their activism is not about them or their careers. Rather, Gruber and Smith are motivated by deeply held values on behalf of an inclusive, antiracist vision for Tennessee Tech and the Cookeville community.

Both professors have long histories of advocating for other faculty members through organizations such as the United Campus Workers, a local union within the Communication Workers of America, and the American Association of University Professors, the century-old organization responsible for setting the national standards for academic freedom and tenure. Smith is also a member of the historic One Big Union, the International Workers of the World. Both teachers have contributed greatly to campus culture through bringing countless guest speakers, participating in community service work, and traveling with students around the world to learn about diversity.

Both are grassroots Cookeville activists involved in causes such as (but not limited to) Black Lives Matter, the Tennessee Indigenous Coalition, the NAACP, and the Cookeville Mutual Aid Collective, which serves the local unhoused and incarcerated communities. In addition to all this, they are both prolific and creative scholars, active in a variety of interdisciplinary areas, and they present regularly at national and international conferences.

In 2015, Smith with other colleagues brought students to the 50th Anniversary Bridge Crossing in Selma, Alabama, and then in April 2018, a similar group traveled to Memphis to commemorate the tragic assassination of Martin Luther King Jr. on the balcony of the Lorraine Motel. In addition to his work at Tech, Smith is a credentialed theologian from Vanderbilt Divinity School and local preacher, having served in or taught at congregations in the Presbyterian Church (USA) and the United Church of Christ. He currently co-moderates a podcast and Facebook page for Presbyterian Voices for Justice.

Today, Gruber’s most recent research project, the revolutionary power of angry women, is inspired by the radical rudeness of Ugandan scholar and activist Stella Nyanzi. For a forthcoming essay collection, Gruber has compiled abstracts on examples of female anger in Germany, Austria, and Switzerland, and she is convening a seminar that will focus on the particular racism black women face when they express rage.

For this work, Tech awarded her a non-instructional grant, which will free her up to work on what matters most to her: Being a better ally, developing her anti-racist agenda, and highlighting the work of Black and Brown colleagues and artists. Julia Gruber and Andrew Smith believe that abolishing white supremacy is a much higher calling, bigger than them or their careers, bigger than Cookeville or Tennessee Tech.
The press and public are invited to a live, online conversation and press conference featuring Julia Gruber and Andrew Smith on Monday, April 19, at 7:00pm CST. The conversation will be hosted by New York-based professor, actor, and blogger Lee Papa, better known to his online readers as the Rude Pundit. Other local Cookeville activists will join the call.

On Thursday, February 4, the Putnam County School Board affirmed that they will allow a racist slur to remain the mascot for a local middle school. (We do not say the slur because it is racist; it was the former name of the Washington, DC Football Team in the NFL.)

Members of the Tennessee Indigenous Coalition were in attendance at the meeting, as members of that group are indigenous Americans and parents of children in the Putnam County system. Critics of the mascot have organized, written letters, and attended the school board meetings because they wish to see the racist mascot removed.

When the motion to form a committee to study the mascot situation failed to get a second, it was noticed that a citizen audibly cheered and celebrated the mascot decision. This individual was Andrew “AJ” Donadio: a Putnam County Commissioner, Tech professor, County GOP officer, member of the Tennessee Freedom Force “patriot” group, and recently volunteered to be the official faculty adviser to the campus chapter of Turning Point USA (TPUSA), a far-right national organization with ties to white supremacists (as documented by the Southern Poverty Law Center, the Anti-Defamation League, and others) and the January 6 attack on America. For more on TPUSA’s racism please see:
https://www.mediamatters.org/charlie-kirk/short-history-turning-point-usas-racism

In addition to Donadio’s outspoken support for the racist mascot, he also condemned the student athletes at East Tennessee State University for expressing their free speech, by kneeling before a basketball game during Black History Month. In a post on his public County Commissioner page, Donadio supports the lawmakers seeking to repress these athletes’ rights to peaceful protest.
Donadio wrote: “Most of these athletes receive scholarships and are representatives of the school and therefore the state. Part of the contract for that scholarship should be that they show due respect for this nation, our military, and our police.”

On Friday, February 5, Andrew Smith made a flier calling out what he perceived as the racist aspects of this professor and the TPUSA organization. On the early evening of Friday, February 5, and the morning of Saturday, February 6, Smith and Gruber posted or left on tables, copies of this flier, which was intended as a provocative challenge to TPUSA’s own rhetoric.

This flier is protected speech by the First Amendment, Tennessee Tech Policy 007, and the Tennessee Campus Free Speech Act. On February 9, Donadio filed a complaint with Tech Human Resources against Gruber and Smith, whose identity he was able to ascertain by consulting witnesses and studying the university surveillance footage, provided for him by Tech officials.

On February 24, the flier-posting professors received a memorandum from interim Human Resources Associate Vice President Greg Holt, citing multiple Tech policies, under which the professors were being investigated. Several weeks into the investigation, Gruber and Smith were notified by Holt of an additional complaint filed against them by the student leaders of the TPUSA chapter. The professors maintain this investigation and the subsequent disciplinary memorandum referenced above are without merit.

In essence, Donadio and now Tech are engaged in patent violations of Tech’s own policies and of the Tennessee Campus Free Speech Act. The flier was extramural free speech protected by Tech policy, Tennessee State Law, and the First Amendment. The investigation itself and subsequent disciplinary memorandum appear to intimidate, threaten, and harass Smith and Gruber from calling out the hate-group activities of their colleague from Turning Point USA.

During the more than 50 days from receiving the initial memorandum from Tech until the recent disciplinary memorandum, Andrew Donadio went on a media tour, during the investigation phase of his allegations against Gruber and Smith, who on the other hand, have waited until after the investigation to go public with their concerns. Donadio contacted local and regional radio, print, and online media.
A sensationally vivid story on the Tennessee Star far-right website, paints Gruber and Smith in a particularly negative light. Additionally, supporters of Donadio have stirred up anger toward Gruber and Smith on their personal Facebook pages, describing them in such inflammatory terms as terrorists, fascists, bullies, and “psychotic deranged goons.”

Since beginning to share their story, Gruber and Smith have received an outpouring of support, especially from their students, former students, fellow activist colleagues, and concerned community members. Interviews and additional official internal documentation are available upon request. 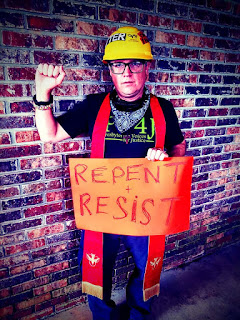 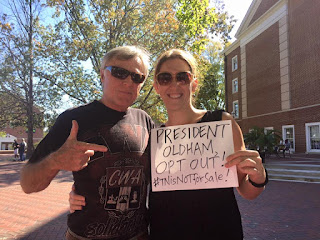 AJ Donadio has a history of racism, sexism, womanizing, and insubordination at previous jobs. I worked with him at another university where he got in trouble for flirting with students, yelling at female colleagues in meetings, go to his Dean whenever a female supervisor reprimanded him. On multiple occasions, I would witness his disrespect, racist, and sexist views. To think he now works at Tech, my alma mater, is horrible to know, especially with some of the accusations against him.

Keep up the good work, Andrew -- and keep speaking out.

Wow...so this is what our students are having to witness in college I have to say after seeing this racist hate filled flyer I wonder why these two are still employed at this facility to have people who are around to just make noise and start issues that bring embarrassment to the college and the alumni well that just needs to end right now and this takeover of our educational system in our community well it would be best to do what is right for the students and our community and remove these two that posted these vile posters their is NO excuse for their behavior