Kicking With "The Wolves" at the Backdoor Playhouse 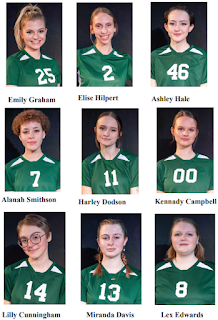 [image: the cast of The Wolves, from the official program]
Over the years, we have seen the cherished confines of the Backdoor Playhouse at Tennessee Tech transformed into the Frankenstein place of Rocky Horror or the insane cage of Marat-Sade. The directors, technical staff, and shop managers permit no imaginal limits to what their mastery can make happen on the ground floor and at the back door of an old university building.
All this is to say that an indoor soccer stadium on a stage shouldn’t seem like such a stretch or feel so claustrophobic and intense. But it does. Attending The Wolves, which opens February 3 and runs through February 12, will transport you to the world of the play for an unforgettable if-at-times uncomfortable experience.
An indoor soccer stadium constructed on a stage is just the setting for something else entirely: an exclusively female-coded space of high school soccer, for an unraveling dramedy that turns tragedy. This middle-aged cis-male critic fidgets in his comfortable theater seat at one of the final rehearsals: I am not supposed to be here. Like a cootie-free clubhouse of yore, boys don’t belong at girls' soccer pre-game rituals.
Although we are just eavesdropping thanks to the brilliant work of playwright Sarah DeLappe, every audience member might imagine they have violated some invisible and visible boundary. The actual games and boyfriends and male coaches are all just outside the world of the play.
The plot is thin, and no omniscient narration sweeps in to save us. We are dropped into something that could be a DIY-documentary, stuck with the always already awkward, the forever genuine anxiety and fierceness of a single-gendered space, but a space that is only feminine in nuanced and problematic ways. The unnamed characters are only known by their number and field position; it makes me wonder, are we at an Athletes Anonymous meeting? Each person of the play is at times shocking or stunning thanks to this tense and talented cast, each astonishing actor transforming themselves to become these players.
As unsettling as everything about this play can be, it is as hopefully disarming as it is haunting and discomforting. The access we have to the characters’ internal and external lives draws and tugs immediately.
For audience members of an older generation, you can immediately feel like a soccer parent, getting to see the parts that you never get to see and shouldn't really see. When a single "adult" character rips that veil toward the end of the show, things have turned so tough that this gives us no relief. By then, our hearts are oh-so-broken with every member of the soccer team.
In the nonprofit world, "astroturfing" is a pejorative term used to describe groups that mask their true motives. Yet the AstroTurf that covers the stage in the Jere Whitson Building also hides the fact that this play is not really about soccer at all (or football -- as at least one cast member would call it). This play is about vulnerability, the power of words to hurt or heal, and growing-up with passion, mistakes, integrity, and tragedy.
Teamwork can be such an overwrought and trite truism within our world, but these Wolves are a team in the best sense. And despite one person playing captain, another playing a parent, and an unseen coach, existing somewhere out-of-our-sight, stage-right-or-stage-left, teamwork is something that makes Wolves-as-a-play so fundamentally feminist, in the best sense. This script and its interpretation by this stellar team conjure an organically egalitarian space, while as over-the-top the high-temperature feelings run, the play and its players bristle with startling empowerment and shared energy.

-Andrew William Smith, faithful BDPH fan & frequent reviewer since 2008-ish
The Wolves by Sarah DeLappe is directed by Joseph Clark in the Tech Players 67th season.
The show opens Thursday, February 3 at 8:00pm and continues at the same time on February 4, 5, 7, 8, 11, and 12. Late show on February 10 at 10:00 pm. Early show on February 12 at 2:00pm. Tickets are $15 at the door only, with students with their Tech I.D. only paying $5. Senior citizens are $12. Tech employees can get in for only $5 on Tuesday, February 8 only.
The Backdoor Playhouse is located at the rear of the Jere Whitson Building, just off the main quadrangle of Tennessee Tech and is under the supervision of Professor Mark Harry Creter.
Posted by Teacher Preacher at 9:54 AM