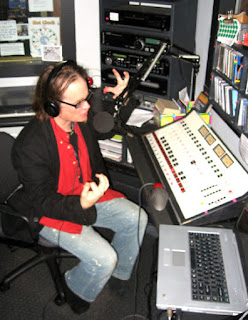 Listen to the archive here:
https://soundcloud.com/teacherontheradio/totr-419-please-be-patient-with-me

In the spring of 2007, I was already a few years into the full folly of my recommitment, the absolutely ridiculous & expensive vow of obsession, to the devoted spiritual practice of incessant music fandom. I would only be in my 30s for a few more months, and this midlife-crisis (my ex-wife called it my male menopause) had me by the wallet & ignited in the call to wander from show to festival to not another show, yes of course another show.

No, I couldn’t tell you this part then but I can tell you now. In 2007, I was facing headlong (& sometimes face down) the acceleration of my alcoholism (in two years, I would finally find bottom & give up the fight to find some grace). That spring, that summer, though, the music was a balm between & inside blackouts & car wrecks & the cruel confrontation with the truth that we can avoid the truth for a really long time, with just the right distractions & denials.

Before finding sobriety, I found a modest one-bedroom apartment that was walking distance from campus, & I could afford it. The Cookeville cost-of-living was ridiculously modest back then. Inside those walls which I covered in chaotic art (as always), I found so much new music to sustain me, even as it would also break me into parts, into the crying, sobbing, but also dancing, raging parts, for me genuine joy is also tied up in a portion of the blues.

As I write this 15 years later, the Mercy Lounge will be closing its doors forever in a few weeks. Discovering that venue in the Aughts felt like sacred code or secret gold. One of many shows I attended there or its sister Cannery Ballroom would alter the course of my life forever. The bill was Cold War Kids, Tokyo Police Club, & Delta Spirit on March 24, 2007.

Accidentally & fortuitously & forever prophetically, I met a student from near Nashville, who was in the first year at Tech. Later, we would connect on, get this, MySpace. Their music fandom & mine would fuse & flower into many collaborations. We would produce concerts & Open Mics at the Backdoor Playhouse. But most importantly, during their brief stint as the program director at WTTU, they would be the impetus for Teacher On The Radio.

Although I hadn’t fully admitted it, my marriage was failing, & I was flailing around to find myself. The curse of the seeker is that simple, sometimes saturated in sadness, but also, often, blissful or sublime: we are always searching.

Music fandom-wise, I was rapt in discovery & wrapped in headphones & the pre-birth of the streaming service revolution that would forever alter how we listen, access to more music online had me nursing the discovery of new bands while I nursed a thousand drinks, because as I would learn later, one was too many & a thousand were not enough. Although now dry from booze, I am still addicted to new music like that!

Posted by Teacher Preacher at 12:15 PM