"Oh, it's good to be alive." Notes from the spinning wilds of a Florence + The Machine concert. 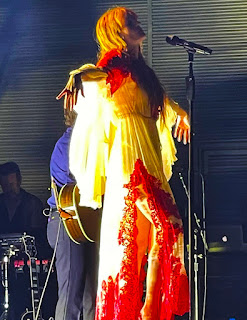 You get to be a consciousness wrapped in shimmering skin & a flower crown, standing on this paid-for patch of public field at the end of summer: gathering goosebumps, screaming lyrics, spinning childlike, shedding tears.

That is one of the many prayers that Florence sings at this lovely liturgy of a British ritual pagan dance cult for the Nashville thousands. If that seems a bit extra, Florence basically co-signed from the stage in her ticklish sparkly that we were attending a pagan ritual. In the Bible belt, during a culture war, no less.

At any moment, our ginger priestess could reach back into the fairy castle of her stage set & conjure any spell. If for only from 9:55pm until 10:45 pm, we were under her spell, but even if I didn’t get to sleep until 12:45am, I was up at 8:15am, humming her songs in my head.

You & your date love planning your outfit for a show like this, even if it is 90 degrees in late September. Looking forward to all the other costumes, fans, we did not disappoint. Did she invoke a trinity of Elvis, Dracula, & Jesus? Well yes, I think she did.

It’s good to be alive. Even if it is just to stare at your muesli midnight snack; yes you do understand that sometimes waging holy war is nothing more than staring at the floor. I want to be wrapped in these lyrics like one of her gowns, all the rising & all the falling. It picks me up, it puts me down. A hundred, a thousand, a million times a day.

It’s good not to drink alcohol at shows anymore (or drink alcohol anywhere), but that might be you mixing Red Bull & Liquid Death, over ice, sucking it down, just before pre-show lights dim.

When the white & blinding light begins, it’s not an oncoming train. The opening song is Heaven, & Florence is backlit like an angel. We might ascend at the Ascend Amphitheater, anything feels possible all of a sudden.

I have been afflicted with this spinning, spitting “dance fever” for a long time. It could get you like it got me.

So Florence sings, “Something's coming, so out of breath/I just kept spinning & I danced myself to death.”

From the first time I heard it, & carried it deep into the woods, on good bluetooth headphones & saved on the phone, because there is no data plan or reliable reception where I am going, the words of this record struck an inner chamber of my being & unwrapped & unleashed an unraveling part of me as gloriously still here, still crazy, but strangely okay with not being okay.

Stuff is so messed up. I mean for real wrong. But it’s good to be alive. So let’s dance anyway.

The communal dance has long been understood as sacred, & I could venture tonight & this tour in the lineage of it all. While I feel closest to Rumi turning desperate grief into dervish ecstasy or the devotional twirl of trippy deadheads, this communal dance could be every gay dance club of the post-Stonewall & pre-AIDS years, could be Detroit EDM festivals of the last many decades, could be countless remote & magical forest raves powered by the powerful hum of how many generators.

She is down in the pit, she is running in the crowd, stopping anywhere & everywhere to anoint or embrace or consecrate. Everybody seems happy to touch her. Is it like this at every show? It honestly seems like a miracle that she hasn’t missed a date yet on this leg for Covid or anything else she might have caught from such gorgeous vulnerable dangerous intimacy.

The energy rises & falls like so many of her songs, she asks us to leave it all here. I mean we have been lost on this arc of a two-hour rock show, drinking metaphor blood & shaking our bodies with the goddess out in public, maybe Florence is right, maybe we should leave it all here. But I am sure I am not alone in wanting to bottle something, bring it home, make a romantic altar for it, light a candle with it, to not let all the magical colored sand just fall through the sieve of time.

For more than two years, I have been in radical religious deconstruction from a part I once played, rural pastor. Wild-hippy turned part-time Calvinist. That journey had so many beautiful places as part of my path. But then we moved on.

Truth be told, Jesus still infects me like he does the lyrics on this album: Where Christ comes back in drag, & the church doesn’t even care that Jesus might not be straight & just shouts “Yes.”

Or even more this: “Oh like Christ up on a cross/
Who died for us? Who died for what?/
Oh, don't you wanna call it off?/
But there's nothing else that I know how to do/
But to open up my arms and give it all to you.”

Lyrics like these say one thing on one listen, another thing on another, but in every case it is abandon & surrender to a cosmic force that abides in the universe. Is that not already ready for the hymnal?

Strange things these are, I am talking about recovering from religious trauma & doing dogma deconstruction: it has not made me less spiritual. Not a bit. Now that I am not looking primarily into one tradition or into a particular theology niche with clear-cut boundaries, the sacred & divine are oozing from every crack of existence with ecstatic reminders of wild wonder & essential humanity. It was always that way, actually, but now it just has these bursts of tawdry technicolor & neurodivergent glee.

Now that I am not “in church,” like I used to be, church shows up everywhere, like hikes, yoga classes, 12-step meetings, but in this case, most acutely & especially, on a recent Florence + The Machine album & at her recent concert to support it.

There are other albums & shows of this year & this period that are taking me to this kind of rambling relentless reverie. It is happening on a regular basis with a wild array of acts.

But this Florence thing this year was something to inhale a little more fully, expansively, ecstatically immersing myself in certain songs, in the total vibe.

So yes, it was cool the other night to find a few thousand others that seem to feel the same way. It’s good to be alive at the same time as Florence Welch & as all these other fans.

[Photo from Nashville by Jason Werner]

Posted by Teacher Preacher at 4:21 PM