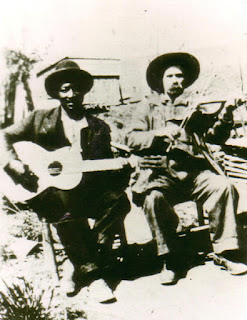 (photo of Arnold Shultz on Left)

On Monday, August 21st (2017), I appeared as a guest of WTTU’s radio program Teacher on the Radio, hosted for many years now by my friend Andrew Smith. I was asked to put together a playlist of songs that focused on one of two things: Native American Indians in popular music (as performers, not subjects), and African American musicians in genres that most folks don’t associate with African Americans.

I said a couple of words about most of the songs, but we also wound up having an impromptu interview in which Andrew asked for my take, as a historian of race, on the current mood of the country in the wake of the white supremacist riot in Charlottesville.

While preparing the playlist, and later having that on-air discussion, I realized something I had never realized before about American Indians and African Americans in music and how that fits into the overall racial history of America. What I’m going to do now is, first, give some links to previous essays I’ve written that deal with the questions Andrew and I discussed, and with which we all continue to wrestle.

Second, I will give my playlist, with a little background about the songs and performers. Third, I will tie it all together and show how the two things are interrelated. First, my previous essays about race. Feel free to check those out later, or do so and then come back here for the next parts.

“Barack Obama and Race in America” http://bit.ly/2iz8HDT (this one has a detailed look at how race was constructed)

“Race in Ferguson, Race in America”

And now, the Playlist.

1. Mildred Bailey, “All of Me” a. Mildred Bailey, one of the most popular vocalists of the late 1920s and early 1930s, and the first non-black woman to achieve fame as a jazz singer, was a member of the Coeur d’Alene tribe and was born and raised on a reservation in Idaho. She used her pull to secure gigs for her younger brother and his partner, a skinny white kid named Bing Crosby.

2. Howlin’ Wolf, “Spoonful” a. Howlin’ Wolf was one of several blues singers from the Delta who claimed some Native American ancestry, in his case Choctaw. A lot of the “hoodoo” (folk magic) elements in the songs performed by him and other Delta singers was a mixture of Native American and African spirituality.

3. DeFord Bailey, “Davidson County Blues” and “John Henry” a. DeFord Bailey, of Smith County, TN, was one of the most influential harmonica players of the first half of the 20th century. He was the first (of only three) black performers to be a member of the Grand Ole Opry.

4. Link Wray, “Rumble” a. Link Wray’s parents were both Shawnee. He introduced the power chord to rock music with this 1958 hit, and heavily influenced the generation of guitarists that came after him, helping form the sound of modern rock.

5. Buffy Saint-Marie, “My Country Tis of Thy People You’re Dying” a. Buffy Saint-Marie was a Cree Indian from Canada, who was adopted by a white couple in Massachusetts and only learned details about her Native culture as an adult. She was a popular folk singer in the 1960s and 1970s, and in the latter decade she was both a Red Power activist and a frequent guest on Sesame Street (teaching about American Indian culture).

6. Charley Pride, “Kiss an Angel Good Morning” a. Charley Pride was the second black member of the Grand Ole Opry. He was a baseball pitcher in the last days of the Negro Leagues, and became a country music star in the late ‘60s, releasing 29 #1 songs in his career.

7. Redbone, “Come and Get Your Love”, “Wounded Knee”, and “Wovoka” a. Redbone was a band composed of two brothers who were of mixed Mexican, Shoshone, and Yaquis Indian heritage; another Shoshone member, and a Cheyenne. “Redbone” is a New Orleans term for someone of mixed race; no one in the band had ancestral connections to Louisiana, but the Vegas brothers loved Cajun music. Their biggest hit was “Come and Get Your Love”, which hit #1 in 1974 and then hit #1 again 40 years later when released as a single from the Guardians of the Galaxy soundtrack. The other two songs on the play list have strong American Indian themes, with “Wounded Knee” applying principally to the 1890 massacre of Lakota Ghost Dancers by the U.S. Cavalry, but also relevant at the time as the AIM occupation of Wounded Knee was going on when the song was released. “Wovoka” was the name of the Paiute holy man who founded the Ghost Dance movement in the 1880s.

8. Jesse Ed Davis, “Washita Love Child” a. Davis was born in Norman, OK, and was half-Kiowa and half-Comanche. He was one of the most respected session guitarists of the 1960s and 1970s, and was especially known for his extended solo on Jackson Browne’s “Doctor My Eyes.”

10. Indigenous, “Things We Do” a. Indigenous is a blues-rock band that debuted in the 1990s, composed of three siblings –two brothers and a sister –who are Nakota, or Assiniboine.

11. Gangstagrass, “Long Hard Times to Come” a. Gangstagrass has had a revolving membership for the past decade, but usually consists of two or three white bluegrass musicians and two black rappers. This song was the theme for the TV show Justified, set in Harlan County, KY.

12. Darius Rucker, “Alright” a. Rucker, formerly of the pop group Hootie and the Blowfish, is the third African American member of the Grand Ole Opry. He has had a string of hits since crossing over to country.

14. Taboo: “Stand Up / Stand N Rock” a. Taboo, a member of The Black Eyed Peas, is of mixed Mexican and Shoshone descent. This protest song about Standing Rock was nominated for an MTV Video Award. In it, Taboo is backed by Native vocalists from several different tribes.

What it all means

The African American acts on this list showed up in “unexpected places”… in the sense that the public associates African American artists with rap, hip hop, blues, jazz, and various subgenres of rock: rhythm and blues, Motown, soul, funk. The public does not associate black artists with country, folk music, or bluegrass. However, there is a lot more black history in those latter categories than most people are aware, and a hundred years ago black and white music in the American heartland was much more fluid.

Black and white musicians borrowed freely from one another. It was common for black musicians to have a repertoire of “hillbilly” or “country” songs, and for white musicians to play blues songs. The line between Leadbelly and Jimmie Rodgers was much less sharply defined than the line between Fifty Cent and Toby Keith. What caused the separation? Radio and record producers. “Race” music –which they defined as music for black audiences –was segregated from music for white audiences. Which they just called “music.”

Perhaps this was due, in part, to the popularity of jazz in the late 1910s and 1920s with white and black audiences alike, and the association of that music (by most older whites) with the black community of New Orleans, which made middle-class white kids dancing to it seem like an unholy cauldron of miscegenation which must be nipped in the bud.

Regardless of the reasons, by the late 1920s “white” and “black” rural-themed music, both with strong Southern backgrounds, were separated on the dial. And that set the tone for decades to come. I remember in the 1990s, when we had these esoteric things called “record stores,” looking for Kenny Wayne Shepherd (a white blues musician). I noticed that Shepherd and other white artists who had recorded blues albums were filed under Rock and Roll, while Buddy Guy and Taj Mahal –who were recording some of the same classic blues favorites and had powerful electric guitar styles –were filed under Blues.

It was often the very same music, played in a very similar style. Yet still it was … segregated. (While much of the older generations’ ire at Elvis regarded his gyrating hips, a good deal of the animus also came from the fact he was a white man singing “black” music). I am going to diverge for a moment to talk about a theory I’ve been thinking about (although I’m sure I must be the millionth person to do so).

In the 1950s and 1960s older blues musicians had a hard time making it in the U.S. due to the popularity of rock and roll (which was itself originally an innovation of young black artists like Chuck Berry expanding the scope of blues). Many of them toured in Europe, where they were more popular than they were at home –especially in England.

Many of the British Invasion acts were heavily influenced by blues, and by specific blues musicians, and did not hesitate to admit it. While this may be an overly broad statement, I think a lot of those young Brits came from very blue collar, working class backgrounds, and identified with blues as a result… but they were not weighed down by the racial attitudes that white Americans their age and social class tended to have, which allowed the Brits to embrace the blues so much more honestly and readily.

The Native American acts in our playlist are different. They were not part of a movement in popular music that was separate from the white “mainstream”, as African Americans often were; they were part of the mainstream, and their ethnicity did not usually stand out. Redbone performed in Native regalia, not just in concert but on live TV, where they showed up quite a bit in the mid-seventies.

But almost everyone I talk to about them, for whom that band’s biggest hit has been part of the soundtrack of their lives, is amazed to learn they were American Indians. The same is true for most of the Natives who show up on this list. And that has been my epiphany about popular music and race. I had never realized just how closely it followed the trajectory of America writ large. I have argued, as have many, that “American identity” was originally forged in colonial times by being defined against Indians and Africans.

In that scenario, Africans were deserving of slavery because (in whites’ eyes) they were “inferior,” and had to be kept separate. Indians were either reviled or romanticized, sometimes both simultaneously, and were always being described by whites as either having vanished in the past (except the degenerates who remained) or in the process of vanishing before the superior white society… a society which absorbed the Indians’ very identity, in an effort to demonstrate their own American-ness (it was not a coincidence that the colonists at the Boston Tea party disguised themselves by dressing as Indians).

And the artists in our playlist? They are either African Americans performing in genres that a hundred years ago included blacks (or would have, had the “genres” themselves existed as separate from music in general) but which now come as a surprise, because “race” music was long ago separated into specific forms, or they are Native Americans that almost no one in mainstream America recognized as Native Americans, even when the artists repeatedly told them so, thus practically forcing them into a “vanished” status.
Posted by Teacher Preacher at 1:48 PM