Aracde Fire’s Everything Now is everything I need to listen to, at least for now. 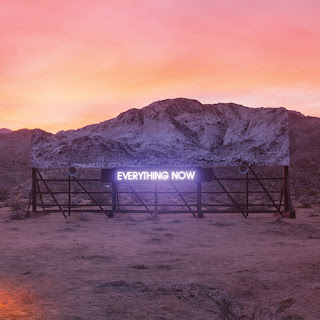 The sharp snark and blistery bad news infected my social media stream on the eve of Everything Now. This was it. The end of Arcade Fire. Of course Arcade Fire almost ended for me after Neon Bible, for I don't know why! Something about the brilliant Suburbs or Reflektor never saturated my ears, until now, what were my fears?


After getting stirred up by the all the online shouts of angry fire in a crowded arcade, I was curious. What could this new album sound like? Feel like? ABBA, really? Too curious, on the day before the drop, I decided to find out, while in my car and flying from the endorphin surge sparked by my morning walk. Some cosmic force turned my attention to YouTube and videos for Everything Now, Signs of Life, and Creature Comfort. I wasn't even on the fence when this inquiry commenced. I was about to hand the haters some extra nails for their critical coffins and join the chorus of jaded cruelty. From the glories of Wake Up back in 2005 to this Twitter-tested toxic wake! But something happened to my head and heart in the short investigation.


By the time I got to the blood burning punk disco of Creature Comfort, I was parked in the carport and on the verge of crying. This teenage anthem of existential worries hit me in a flurry with a fury of our common insecurities. Just make me famous, just make it painless. We don't know what we want, just that we want something. The death of desire meets every desire organizing itself against death.


Behind the whole Everything Now project is a brand-name alternate universe, where "everything now" is a corporate concept that is also a mock corporation. Each song is an imprint with its own logo. Because I was so busy dropping-out during the first years of mobile phones and the internet, I also missed U2's pop-infused critique of pop culture the first time around (but later came to admire it). Of course, that was called Pop, and just like so many people were so busy mis-reading that cul-de-sac, the same seems to be happening to the big-tent happening currently being engineered by the evangelistic enthusiasms of the Win Butler Family Band. If Everything Now is Arcade Fire’s Zooropa-Pop period, let them have at it, and let us enjoy the sparkling beats.


Because I had spent some moments lost in the cultural studies wings of literary and social theory during the eight-year arc of my undergrad days, it would be easy to think Arcade Fire was just rehashing and recasting a giddy projection of nuanced simulation. But honest, I really groove into ths poor-man's crash course in Situationist propaganda, warmed-over Society of the Spectacle for people too young to remember May 1968 or Greil Marcus on the Sex Pistols. The same artists that brought us a Neon Bible clearly know something about the mirrored-hallways of Baudrillard's hyped-up hyper-boredom.


If people think that Everything Now and Infinite Content are only Abba-inspired happy-clappy innuendos about Googling GIFs or other image-heavy, throwaway "whatevers" found in the endless gigabytes of entertainment on smartphones and tablets, they might be missing the point within the point. I don't think U2's Playboy Mansion was about a good Christian boy like Bono losing his way among Hefner's young hotties. I thnk it was really about postmodern ecology of Protestant eschatology, that is finding true heaven, even out of discards from hedonist hell. Somehow in the same way, Arcade Fire lyrics can turn on a dime into theological, ecological, and psychological manifestos of hope. Inside every single one of these infectious new-wave-disco jams is some juicy nugget of higher truth.


My favorite meditation for these multiple meanings, this comes deep into the disc, with the slinky slipperiness of Good God Damn. This is some wild Sunday-morning-coming-down revelation, a burning bush for the people too burned-out for burning bushes. Like an earlier track, it's grooves can be misleading, in this case some hangover funk filled with suicidal ideation. But the song begins with a desperate curse and flips itself into a dynamic prayer, simply by the lyricist changing which word in the title, which is also the chorus, he emphasizes. There is also a missing comma or long dash in the title. So the "damning" is not an epithet aimed at undermining the eternal It, but rather, by the song's conclusion, it is an exclamation of needed recognition. So it is not "Good, goddamn" by any means but a song about a "Good God" that prompts the poet to utter a divine belch of relief in the final "Damn!"


Within a few listens, I am completely inside Everything Now, and it is inside of me. I found myself driving to another city just to snag a copy of the vinyl on the weekend it dropped. I watched the band's livestream from Brooklyn on the eve of the album release, watched their spot on Colbert including some goofy bits fromt he Everything Now corporation, watched their recent Sunday-night headlining set from Lollapalooza on RedBullTv, and also snagged tickets to see them soon on the upcoming tour. Hearing the new songs mixed with old ones clarifies that Arcade Fire are purveyors of a coherent canon, a band in the best sense, worthy of our attention, admiration, and even pushback, if that is your thing. (I asked a friend for their take, and they came up with something totally different.)


There seems to be an easy rendering of Everything Now that says the disco flavors must be ironic and detached against the formerly inspired intimacies of earnest rock in the tradition of Springsteen or U2. Just because Everything Now had some crazy and clever marketing gimmicks doesn't mean the band has given up on meaning. I don't think they meant to be coy or cute. Case in point is the cheesy send-up Peter Pan. Why not just enjoy the giddy narration of eternal youth without nitpicking it as the worst song ever? I get it, Everything Now might take some unpacking for some Arcade Fire fans. I now regret not giving Suburbs or Reflektor their proper due, but reuniting with this band has been a gratifying celebration.


Sure, you can say that Infinite Content is just about how many channels you have on your smart TV and how many days and days of unwatched wisdom you have clogging your Netflix queue. Of course, whether the omniscience of which they sing is corporate or cosmic depends on the context of how we are hearing the song, but I suggest both angles for listening have license. Yet if you only hear self-referential media theory with a pop hook and not the possibility of liberation and love, you might be missing the better version. So I hopefully hazard that Arcade Fire are also reminding us about everything and infinity in their more transcendent sensibilities, to help give us courage and joy to face the coming days. 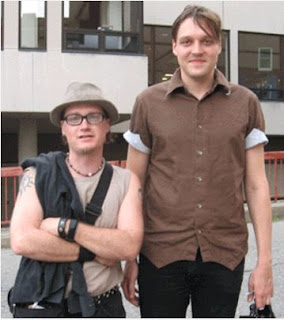 the author and Win Butler, ten years ago, in Asheville


Posted by Teacher Preacher at 7:03 PM