The Beautiful Mystery of R.E.M. 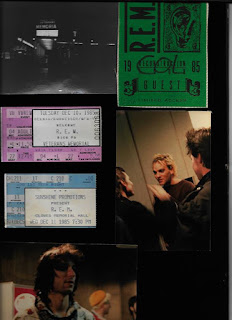 The American beauty and the southern mystery of R.E.M. music and fandom are like this: the tangle of kudzu on the cover of Murmur, meeting the jangle of Peter Buck’s guitar, getting merged with the mumble of Michael Stipe’s surreal vocals, being held high by Mike Mills’ harmonies and bass, and finally grounding out in the rhythms of drummer Bill Berry.


In the early 1980s Athens from which R.E.M. emerged, there was innocence and irreverence in the air, a sweet edge of sloppiness, an adamant amateur hope, an unconventional unprofessionalism. Somehow, a 60s folk-rock garage-band feeling emerged from it all, but they were not trying to be the next-big-thing, not a “thing” even. While Michael Stipe has some social and artistic kinship with Bono, the Georgia artist does not share the same over-the-top gregarious audacity with the Irishman. The sense that R.E.M. were a kind of pop culture cosmic accident, this notion is inescapable and remains today. Yet too many forces converged and collided all at once to make this mysterious beauty  real.


This beautiful mystery, yes, has been with me for more than 30 years, and it’s been maybe 32 years, give a day or two, since I have sat down to write about this band’s sweet sonic canon. Several days ago, the band released a box set of live music from the BBC in the United Kingdom, more than 100 songs clocking in at more than seven hours, and this occasion has prompted me to cook up a new R.E.M. mixtape and to finally scribble these words.


One of my first R.E.M. memories was the MTV program “The Cutting Edge,” produced by the band’s record label IRS. Around the time of the group’s second record Reckoning, they recorded an acoustic set and interview for this show. It lasted just a few minutes, but I taped it with the VCR, and I would listen to and watch it over and over again. These guys spun college radio wisdom and a fierce spirit from their thrift-store threads, includings Stipe’s defiant stance: “We don’t strive to be a critics’ band. We don’t strive to be a band, really.”


Early R.E.M. intoxicated me. To relisten to the first three albums, over and over again and again on repeat these last few weeks, this experience has been to transport myself to the booth at the high school radio station, to a thrift store from where I imitated the hippy punk fashion aesthetics of my underground heros, to a turntable in the basement of our house on Timberline Road.


It’s hard to say now just how huge it was that I got to be a DJ on high school radio in the mid-1980s. The “radio shows” I had been inventing on a cassette recorder in my parents’ basement were now suddenly real weekly radio, with large unwieldy crates of albums packed into the trunk of the car and carted over to the high school, recorded live in a booth with two turntables, with legit studio equipment, and beamed all over the metro Detroit area airwaves on 88.3 FM.


I had two close friends in high school radio, and they were both one class ahead of me; so when I was a junior in fall 1984, they were seniors. They mentored me and encouraged me on the newspaper staff and into the radio booth. I think my show began in spring 1985 and was first called “Music For Thinking People”; senior year I changed the show to “United Underground.” Both boys were part of my suburb’s Jewish community, and we bonded in our incurable obsession for popular music, for rock and roll.


Although we all inhaled new music like oxygen around that time, we each had that one artist that mattered more than all the rest. For S. it was New Jersey’s Springsteen. For me it was Ireland’s U2. For J. it was Georgia’s R.E.M.—and while I respect the Boss, it was R.E.M. that captivated me on a par with the quartet from Dublin.


In early December 1985, Joe drove us to Ohio. I don’t remember what I told my parents or my school, but I am sure of the essential detail: I just skipped out on two days of 12th grade to go on R.E.M. tour. We made it to Columbus for the first night and then Indianapolios the next day. I also don’t remember getting a hotel room, but with it being December, it’s hard to imagine sleeping in our car either. If we’d spent an all-nighter on Waffle House coffee, I think I would have recalled that detail. We had arranged in advance to have comp seats as the DIY journalists we were. This came complete with photo passes and backstage passes.


The Minutemen were the opening act for these two shows; sadly, singer D. Boon would die a few weeks later. It’s amazing to me in retrospect that an avant-garde left-wing California punk band would be the opening act for rising stars like R.E.M., and I will always treasure getting to meet and visit with D. Boon after these shows. Thirty-three years on, I am still grateful for friends like S. and J. and for parents who allowed these adventures and most grateful for the adventures themselves.


To this day, I am still following U2 like a fanatic—attending countless shows, writing numerable reviews, networking with fans at shows and all over the interwebs, and even presenting on the band at the international “U2 studies” gatherings. Since R.E.M.’s retirement in 2011, I have regretted that my pure form of concentrated R.E.M. fandom faded after the 1980s.


Back in those early years, I think I already assumed that I would follow R.E.M. and U2 most closely for all my life, but that did not quite work out. For personal and professional and mostly financial reasons, serious rock fandom for me basically skipped the 1990s. When I reunited most intently and intensely with U2 in 2001, the same never happened for R.E.M. and me, although I did continue to listen to and follow their music.


While 90s R.E.M. is a blur to me, mainly because I was in another world, from the having-a-baby days to the hobo-traveling days to the founding-a-commune days to the grad-school days. While I did not follow closely because for the simple fact that I was not buying CDs then, I did listen. To get new R.E.M. was to wait until I was visiting my brother’s house, to show up with some cheap, dime- store, blank cassettes shoved in my backpack and to hang out in his music room, taping whole albums and also doing my favorite, mixing mixtapes.

Listening again and writing about them again, these gestures are helping me complete that perfect circle. I dream every day of an R.E.M. reunion, but if the adamant statements of the former bandmates are true, that is never going to happen. For that and many other reasons, revisiting the R.E.M. we do have, such as the epic new release, is important to the lifelong R.E.M. fan and to any new fans they might gain in their retirement through the long legacy of the back catalog.