Do You Mind? RKS Heats Up Winter at the Tennessee Theater 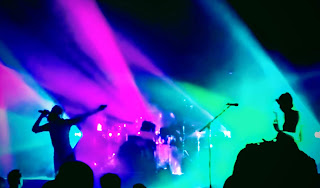 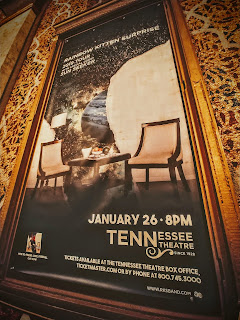 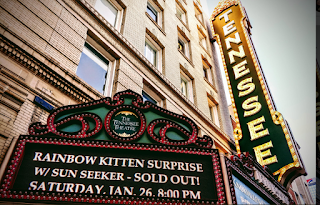 Bonnaroo is always a beautiful place to discover new favorites, and 2017 was no exception. But you are supposed to be standing, shoulder-to-sweaty-shoulder, under a tent or under the stars or in the beating afternoon sun. But this time, I was under the influence an overheated Tennessee summer fatigue and napping in one of the air-conditioned VIP lounges. My wife had to wake me up to catch the band being streamed on one of the TV monitors.


You cannot miss Sam Melo’s signature dance moves or ever forget his catchy lyrical hooks or be spiritually unmoved by his prophetic charisma. The addictive rock sounds were at once familiar and strange. Early comparisons ranged from Modest Mouse to Kings of Leon, but there are also world music and hip hop influences abounding. I cannot help but see the spirit of Freddie Mercury busting forth but these young people were born from an Appalachian college campus origin story that also makes me think of Michael Stipe.


Our path to hardcore RKS fandom began in the sticky Bonnaroo dust, but we had to wait before it could continue outside of inhaling their back catalog. We left Bonnaroo and missed them immediately. My sweetie kept asking me to find us another show. The tour supporting their second eponymous disc RKS had long come and gone. But we were ready to go all in!


Then in the spring of 2018, they dropped their major label debut: How To: Friend, Love, Freefall. It was easily one of my top records of last year, not the least for its courage in addressing its singer and bassist coming out. Without hesitation, we grabbed our tickets to Sloss Festival for their Sunday set, only to have that stormed out and canceled. A free set at Nashville’s Live On The Green was a needed hit of their magic, but they were only openers sandwiched in a multi-band bill, and now, we were really hooked. The winter tour that we are now in could not have got here soon enough, and they are bringing some much needed heat to this January, soon February, cold.


Sam Melo was raised by missionaries in the Dominican Republic. In college, his pedigree ranged from dance to religious studies. From his mysteriously gorgeous lyrics to the intensity of his stage presence, it’s all religion sex and alcohol rolled up in so much pentecostal spit. Only a handful of their songs are radio-appropriate for all the well-chosen cuss words that clutter Melo’s literary word bombs. Hurt and hunger, chaos and confusion, these and so many demons and doubts all mingle with energy and ecstasy, with joy and jubilee.


Their Saturday set at Knoxville’s eminent Tennessee Theater (how many great shows have we seen here over the years) starts with a slow burn of deep cuts, accentuated by a sizzling light show that would last all night. But the ceiling starts to come off by the time they get to “Cocaine Jesus,” followed by “Devil Like Me” and “Seven.” By the time we get to “Holy War,” it’s due time to remind ourselves what a truly eclectic and progressive ensemble this is, undoing fundamentalism and hate, without hitting anyone over the head, one song at a time.


One thing about about a seated show, even in a room as gorgeous and good-sounding as this one, it’s hard to get your dance on, even when standing at your seat. Toward the end of the set, Melo asked everyone to leave their seats, which prompted a couple hundred to head down the aisles toward the stage, increasing the palpable energy in the room which has been building all night. Peaceful enough, the ushers let it all go down, as the people started to really get down. The energy kept building, and the night’s rendering of “That’s My Shit” reminds you how hard this band can hit it with a range of hip-hop swagger and even Rage Against The Machine moves.


As RKS were winding up their main set, Sam Melo, who had not talked much all night, started sending shoutouts to the crew. Then he introduced the band, using feminine pronouns for the glamorous and gregarious bass player Charlie Holt; she kind of reminds me of Flea, if Flea were a gender-fluid gal from a North Carolina college town.


The section of shoutouts slipped into some speechifying that mingled the insanity of a street preacher, with a call to celebrate reminiscent of the MC5’s “kick out the jams” and “time to decide” speeches, more than a generation ago.  In call-and-response fashion, Sam Melo kept asking Knoxville, “do you mind?” One time after another, until the already loud crowd was even more deafening than the crunch of Ethan Goodpaster’s lead guitar, that also at this point reached its dirtiest heights of the night.


Once we were all worked into a frenzy, the band belted out the main set’s closer, which was the early track “Run,” rocking the rafters and kicking with the kids, lyrical licks of “money money money” mostly out-of-sync with the rest of the RKS canon, not that anyone cared, but it reminded me of that time late in the Jacket set when “Run Thru” would just shatter everything that came before it with epic badassery.


It’s impossible to understate the unbelievable jolt that comes from a band that clearly loves to perform live. Sam Melo is that singular yogi-shaman sparkplug whose glorious gift just covers everyone in the crowd as he twirls, gyrates, and caterwauls around a stage. The rest of the group are as into it as he is, but they allow the frontman to steal the show in that perfect frontman fashion.


An encore of two songs -- “Fever Pitch” and “Hide” -- was far too short before the house lights came up after a stupendous 90-minutes of immersion into rock wonder. But that “Hide” has become their anthem says so much good, even as the American landscape experiences daily backlashes against the beauty of human diversity. From their unforgettable band name, to everything about their shameless authenticity, this is all a great and needed dose of musical medicine. Don’t hide, don’t hide love, and yes, we are grateful that RKS are not hiding one sonic thing.

Posted by Teacher Preacher at 5:32 PM