Faith, art, and another book about U2

REVIEW of Timothy Neufeld. U2: Rock 'n' Roll to Change the World. 2017. Tempo: A Rowman & Littlefield Music Series on Rock, Pop, and Culture

When I was in 11th grade, I spent the entire school year reading, researching, and writing a major paper about black American author James Baldwin. From his novels and nonfiction, I discovered that the best literature lived at the intersection of spirituality, sexuality, and social justice. Turns out that an Irish rock band I fell in love with around that time also addressed the theological, sociological, and psychological with a similar inspiring intensity. Over the years, all the best poetry, music, and art that would captivate me seemed to always explore similar convergences.

When I am choosing textbooks for an Introduction to U2 Studies class at the University of Rock And Roll, Timothy Neufeld’s tremendous primer that was released in 2017 would definitely be on the list. Since the school where I teach undergrads is a little more old school, the best I can do is integrate U2 into my World Literature curriculum, which I do. Tim’s perspectives on U2 are some of the ones I most value and would most likely consult at this juncture in my academic fandom.

Granted, there are lots of U2 great books out there, both from a popular and from an academic perspective. It would be dishonest to deny that I would not mind owning them all, each and every one. But Tim’s text is one that I have read twice and keep going back to for regular consultations. He begins with a more-or-less chronological journey through the band’s canon and career. Even in doing this basic review, his take is prescient and profound. Even though it’s a story I have long loved and even lived since my days of teenage obsession, I learned lots while inhaling Tim’s version of the tale.

But it’s the back side of the book that truly catches an unforgettable fire for me, with the chapters “Faith and Art” followed by “Social Engagement.” Here, Tim interprets U2 with a lens similar to one I tried to apply to Baldwin back when. In fact, Tim does all this with near perfection, as great teachers and authors do when they compose an introductory text like this one. It’s also excellent modeling for his students, for all of our students, trying to figure out what academic prose about popular music is supposed to look like. Since Tim is also a seasoned online journalist for one of the great U2 fanzines, he knows not to get bogged down with idiosyncratic jargon or personal pet tangents. He keeps the main thing the main thing.

While those last two chapters are incredible as is, I want to point out something that I greatly appreciate about how he has written them. You see, when it comes to faith, art, and social engagement, U2 has its partisan choir loft and its chorus of haters. Somehow, Tim manages to deal with many of the criticisms and contradictions that turn people against Bono and the boys with bitter passion. Problems are in Christianity that U2 are too evangelical for liberals and too liberal for evangelicals. In politics and economics, they are too capitalist for leftists and too progressive for arch-capitalists. Tim does not water down or walk past some of the good points from either side, and he mostly just tells the true story as best he can, where these kind of issues inevitably come up.

He does all this without overly cheering one side, getting defensive, or even allowing too many fanboy biases to take over. See, we know Tim on Twitter, at the U2 conferences, at the shows, and on his online interactive show the Crystal Ballroom, and Tim is the true fan epitomized. But his writing is scholarly and sympathetic and open-minded in ways that we other fan authors ought to find enviable.
If I ever get around to writing my U2 book, the story will be much more personal, but until then, this will be my favorite U2 book, with some near rivals by Steve Stockman or edited volumes by Scott Calhoun or Beth Maynard. There are already some great U2 fan memoirs, and this is not one of them. But do not let the academic aspect scare you away. This book is just so well-written and accessible, it is a book you could give your non-U2-fan family members and colleagues to help them understand why we in the U2 fan community are the way we are.

When this book was first released in hardcover, it was priced for libraries, specialists, and completists. Now out in paperback and Kindle, this book is yours for a fee that the regular people can afford.

If I were to summarize one takeaway that makes this text so great overall, it would be this: Tim fills in lots of gaps and aptly describes nuances that have been around all along, but they have never been found in one place, expressed so succinctly and so elegantly. Rock to change the world? Maybe, probably, perhaps. But to paraphrase a lyric, this music changed the world in me. U2 certainly changed Timothy Neufeld’s world, and now, this book also changed mine.


Follow @timneufeld on Twitter. A playlist based on the chapter "Faith and Art." Photo -- Teacher on the Radio with Tim's book. 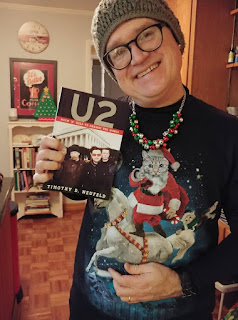 Posted by Teacher Preacher at 6:12 PM