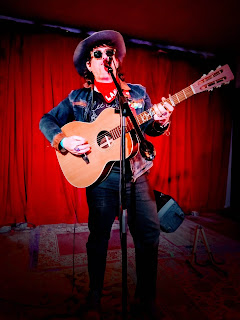 Music streaming services get buckets of bad press, especially Spotify. Forgive me for not rehearsing all the moral indictments against the model and confessing my sin as an addict. I am hooked to the tune of or to the statistics (according to them) of 87,000 minutes or almost two months of 2022, being spent with the streaming songs rocking my long walks on my Bose bluetooth headphones or shaking up my morning ecstatic meditations with an Alexa speaker shot through a banging sound system. I only say all this, because their Pandora-like abilities to suggest music are actually fantastic and factor into this long-winded review of an album that dropped today.

I am an ADHD maximalist, whose cup always overflows. My appetite for new music is so insatiable and then some. So when I was looking for more stuff in the Bob Dylan-meets-Utah Phillips-meets John Prine-meets-Pete Seeger lineage, but I wanted it to be a little weirder and wilder than my steady diet of Jason Isbell, Avetts, Brandi, et. al., the recommendations provided by the app on my phone were truly delivered. Were it not for the algorithm recommendations for a massive playlist I was building last January of agit-folk utopia, my audiophile soul may never have crashed into my radical sibling from a short eastern jaunt down I-40.

Very early in 2022, I discovered a favorite album of 2021 that didn’t make my list, mainly because I had never heard it.

“Cast Iron Pansexual,” by Knoxville’s “Adeem the Artist,” really got inside and changed me. The album has everything I adore about folk music, from the sonic scaffolding of addictive earworms, to adorably insecure and contagiously courageous expressions of gender fluidity, to their theological trilogy about the possibilities for an afterlife, to talking-blues takedowns of the heterosexist capitalist white supremacist patriarchy shit-show of post-Trump America.

Wait, they also have a song about gentrification and Asheville hipsters from the perspective of a hick from Boone? I am head over heels already!

To say that “White Trash Revelry” (released today, wherever you get your music) was my most anticipated album of 2022 would be a gross understatement. I mean I was just hanging out waiting for it with a hunger not unlike the one described in their 2021 track “Fervent for the Hunger.”

Discovered them in January, had to see them in February. In the dark of winter and early days of this phase of the Russia-Ukraine war, I drove to Nashville to see Adeem at the Basement where they are back, celebrating the new album tonight. I drove to the Exit In back in September, to see them open for Sarah Shook and American Aquarium during Americanafest (my first and hopefully not last of that amazing event). Then I drove to Newport, Kentucky to see them open a show in a converted church in Newport, Kentucky. I would have seen them even more, if time or schedule allowed. So tonight will be my 4th Adeem show if I finish the review and get there, and I hope to continue to count myself as a superfan. Should we be dubbed Deemies? I deem that a possible nickname!!

Basically gushing my heart out at their merch table in Newport, I begged Adeem for the review copy. Within minutes, I had the private reviewers’ link in my Soundcloud.

In an ideal world I would write multiple record reviews each week. But music journalism is not my day job, so I only squeeze in a couple of proper record reviews each year, if that. And this one is more of a fanperson’s diary entry of biased beatitudes and sacred scribbles. But I must pause to celebrate this album.

Yet yesterday, I got some really bad personal news, so that I almost jettisoned penning this review, but instead I am sucking expresso and sitting in a coffeehouse in South Indianapolis (after catching another show up here last night), before driving back to Tennessee for the album release.

The real singalong even-in-your-sleep hit for me is “Going to Hell,” the third chapter in their aforementioned trilogy about the afterlife. Because they say “shit,” I could not play it on the college station where I am a volunteer DJ. The other two tracks in the trio--”Going to Heaven” and “Live Forever”--were on “Cast Iron,” and in recent sets, Adeem has placed all three together, interspersed with some high-brow theological banter. If you can imagine Adeem as a former music pastor turned Episcopal Atheist Evangelist turned witchy apostate, you can begin to grapple with the significance of all this. That the song successfully merges references to Robert Johnson and Charlie Daniels only verifies Adeem’s intertexual cultural literacy in their genres and the attendant messages about mystical and existential matters.

Keep in mind I love Adeem’s voice, charisma, melodies, all of it, but it’s their lyrics that are true genius. They just slay me, keep me listening again and again. They are already at the level of Bob Dylan and John Prine, Jason Isbell and Brandi Carlile, all to whom they have been compared by people other than me. This stanza from “Going to Hell” needs to be part of the grade school music and religion curriculum:

“Well, I met the devil at the crossroads and I asked if we could make a deal

He seemed puzzled, so I told him the story, and he said, ‘None of that shit's real’

It's true I met Robert Johnson, he showed me how the blues could work

Their most popular single off the record is “Middle of the Heart” which is a tragic narrative disguised as sentimental bro-country. For someone unfamiliar with the rest of the Adeem canon, it is jarring, tricking you into thinking it is a crossover to the kind of Nashville radio ballads that get blasted by teary-eyed truckers. But the last stanza of the song is an anti-war sucker punch to the horrors of humanity just being humanity. As one chapter in this 11-song masterpiece, it truly digs.

But I confess that I hate the truth that this is the introduction some people get to Adeem, as opposed to every song on this album’s predecessor, and that is just me, being like this “I loved him ten months ago,” a real fan snob. So forgive me. Adeem has made an expansive tent revival out of their subversive intervention with so-called Tennessee values turned upside down, and once a person tracks the whole record, they will not be able to think “Middle” is an indicative track, but rather a testimony to the far breadth of Adeem’s talents.

Past the singles, some of the deep cuts are so profound and cutting. But it all breaks my heart, revs up my rage at injustice, and encourages me because I get to breathe the same air as Adeem and fight the fascists with them, arm in arm, their songs on our lips, their convictions in our hearts.

Their songs also teach me about our shared experience as Christ-haunted heretics. The second track, even more than “Going to Hell,” lays it all out. It is speculative fiction about a gay love affair between Judas Iscariot and Jesus Christ, and it is emotional, heartfelt, believable, beautiful, exhilarating. Take that, all y’all homophobic and transphobic Chrisofascist jerks! This, not on your “Onward Christian Soldiers” on January 6th BS, it is the new wild hymnal, y’all. We are taking the American flag out of your churches and waving our trans and rainbow flags within the ecumenical ritual instead.

“Heritage of Arrogance” is a stunning musical manifesto crammed into a country track, from and for folks who know by intimate experience that the KKK and white evangelicals are often the same people, and we cannot stay quiet about that anymore. This is lament and liturgy and prophetic plea:

“I saw Rodney King on the TV screen

I heard my parents make excuses

For the man who fired the gun”

Both “Painkillers & Magic” or “Baptized in Well Spirits” are the funky fuel in the engine of this thing, the inebriated musk and mud of a working class Southern subculture soaked in whisky and tweaked on pills. They are each hootenannies of sorts, keeping up the reveling in this Revely, reminding us that even amid such strident preaching, this shindig is a party too.

“Rednecks, Unread Hicks” includes extra collaborations on vocals and banjo with the band that Adeem assembled for this recording. (Including Jake Blount and Jett Holden; there are many other collaborators throughout, and I apologize for not name-checking them all.) This track is another take on the all-inclusive queer-leftist social-justice takes that are the Appalachian babbling brook that this whole disc takes us swimming in.

Even though I have listened countless times, I am still trying to track all the activism, religion, and pop culture references within just this one song. It’s got a slinky, side-two fuck-it-all jam-session groove to contain all the ridiculously rebellious references. I can’t say I have a favorite track overall, but this one packs everything I love about Adeem & is also another song that is singing in my head sometimes by surprise.

The most heartfelt and comforting track for me is “Books and Records,” for it just resonates to other parts of me than the rest of the album. It’s a confession about not making your bills. Rather than going to the payday loan place or to sell plasma or to sell sex like in a Townes Van Zandt song, the narrator is selling, no please say it isn’t true, their books and records. See this is one of those tracks that kicks my heart in a harder way. When I had to say goodbye to the booze and drugs when entering the 12-step family so many years ago, of all my replacement vices, coffee and pastries among them, record and book collecting are obsessive habits to surpass them all. And to be blunt, I can imagine a world where I have to sell them all, just to eat or make rent. That just doesn’t seem even remotely far-fetched to me and the melody here makes me cry.

Even though I am close to 2000-words, this still feels like a rushed summary. If you made it to the end of my review and you have not listened to this album yet, please give it several spins to see if it carries the same kind of ugly cries and joyful flights that it does for me. It is the apostate gospel that makes us feel loved and seen and somehow makes it safer to be a southern leftist revolutionary mystical freak. Adeem, we love you and are grateful for this record in ways we are still just beginning to learn.

typing in a coffeehouse in Indiana

Posted by Teacher Preacher at 11:04 AM