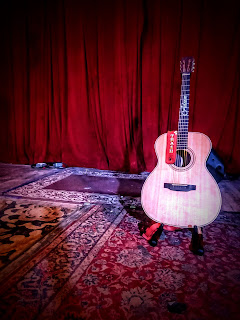 Teacher On The Radio presents- a month by month selection of some great festivals & shows, seen & heard in 2022

Jason Isbell at the Tennessee Theatre in Knoxville

Just needed the “Driver 8” encore; both Jason & my wife Jeannie came down with Covid right after this

Adeem the Artist & My Politic at The Basement in Nashville

Heard “Going to Hell” months before it would be released & the december drop of White Trash Revelry would shock the country/Americana world.

Langhorne Slim at the Walker Theatre in Chattanooga, TN

Strawberry Mansion was my favorite album of 2021, & this intimate show had so much love & passion & pure fire energy for a solo-acoustic set. Langhorne is really celebrating his sobriety & huge appetite for life & these songs are hardcore healing medicine.

We loved this two-day curated festival, very similar to Moon River in structure, one of many waterfront festies we would attend this year. The walk from parking to entrance took us through abandoned military housing. Both headliners were fantastic, but our hands-down hardcore highlight of the weekend was a steamy stunning purely pummeling powerful hour with Delta Spirit on Saturday afternoon.

Yes this was hot, overcrowded, & absolutely crazy, so grateful that I had a friend to drop me off & pick me up, I mean really really really fun, but one day is definitely enough!

We rented an old-school, beachfront motel, about 20 minutes from the festival & absolutely loved  it. We have been following The Collection for a decade now, & they are about to get signed to a major label. This show was a duo, due some illness in the band & absolutely delightful. Tonight is our first Susto, & we are so here for it. Although they didn’t release any new material, we really discovered Susto for the first time this year

One of our many required Jason sets this year, a surprisingly good Cage The Elephant, my first Jenny Lewis in many many moons was amazing, but Moon Taxi was just wow wow wow as always, especially their second-set all Rage Against The Machine tribute.

Despite some fierce downpour rain that killed the first set, it was still amazing. Incredible. My older brother treated me, his first Dead show of any kind. Shakedown was amazing. Got to meet the Dead Tarot deck people, a political radical/black power dead t-shirt guy, saw a street musician I first met in Venice 35 years ago, & enjoyed an amazing grilled PBJ. Looking at the prices on the tickets I have not bought for next summer, that may have been my last Dead show ever.

Goddamn Gallows at The Earl in Atlanta

In the summer of 2020, when I left my church job, my sweet spot for spiritual catharsis was gospel songs with cuss words. That’s when I discovered “Y’all Motherfuckers Need Jesus” by the Goddamn Gallows, who were thrilling to see in a tiny ATL punk venue.

Honeybrook & a bunch of poets at the Backdoor Playhouse, Cookeville

This year I reconnected with a great local band that plays mildly psych poppy warm classic indie rock in the tradition of Wilco or The Band, Honeybrook, fronted by a colleague & a former student. Myself & an array of poets opened the show.

Ever since my friend Kurt died, I have tried to see Wilco at least once a year, as a kind of memorial tribute. The first time was with a common friend, who once took the three of us to see the Boss at Bridgestone. The new Cruel Country album has all the summer shades of the Sky Blue Sky Wilco that I fell in love with back in 2007.  This solo trip to Kentucky on the eve of my semester/academic year was the healing balm I needed.

I have always loved Pink Floyd’s more famous records The Wall & Dark Side of the Moon & have also followed the ferocity of Roger Waters’ leftwing antiwar activism. I frankly am surprised that  a show of this level of societal critique made it to a place like Nashville in these times & that it looks like the RNC pleading to have their convention in Nashville in 2024 was rejected. We had cheap nosebleed seats & were given brilliant upgrades by the Bridgestone staff. A sonically & morally stunning night.

I listen to lots of folk punk but forget to prioritize seeing these bands live. I am so glad I made it a priority to check out Holy Locust whose entirely unplugged set on the floor of the venue (forget the stage for some anarchist folkies) was sublime & transcendent in every possible way. They were also playing Muddy Roots here in Cookeville, but I have delayed having my first Muddy Roots for another year.

Moon River Festival in Chattanooga (cut to one day)

Drew Holcomb’s curated festival is a regular stop for us. We loved & needed The National’s headline set, but are pretty bummed that day two got cut for rainy weather, which kept us from having our only scheduled Band of Horses set of the year.

I almost didn’t say “go” on this mid-week show, but I am so glad I did. My first-ever journey to Nashville Americanafest.  I have been following Adeem’s rising fierce folk star since the top of the year, & it was great to have only my second American Aquarium & my first Sarah Shook show. So much fire.

If I don’t see Jason as often as I can, I get bad cravings; he just speaks to my soul like that.. So I just make it a point to go. This was our first Shoalsfest on a chilly early October weekend on another riverfront. A simple, single-stage fest with great music was all we needed. Drivin N Cryin so incredibly blew my mind & reminded me to go on a deep dig of 80s southern & rural jangle rock in the days following, perfect sounds for autumn & my 55th birthday.

Made a last minute decision for this Sunday solo jaunt to Birmingham. Independent & underground psychedelic rock are their own thing, & Austin’s Black Angels bear a million torches for this genre. For a pure brain melting total soul scorching rock-as-religion experience, this show had  it all.

We were not able to get tickets for the Louisville homecoming shows over the summer due to date conflicts, so when those shows were canceled & rescheduled as a Halloween throw-down, we were all in. Such a great way to spend our holiday weekend.

William Elliott Whitmore & Adeem the Artist in Newport, KY (above picture is Adeem's guitar from this gig)

My passion for great artists that are new to me runs really deep. I decided I had to sneak up to Kentucky to see Adeem, & I got the added benefit of seeing a fierce sizzling one-man-band in William Elliot Whitmore. The whole experience was exhilarating & mesmerizing as I explored more of Newport (coffee, record stores, etc), even staying in an AirBnb a block from the venue & a loft above a magical gift & potion store.

Ryan Adams in Indianapolis, IN

I had mixed feelings about Ryan Adams before his crash-&-burn after being called out in the NYT for his relationship history. I also have mixed feelings about rock culture cancellations & cancellations in general. All that said, the Ryan resurrection this year was something to see, releasing album after album after album of solid songs. Then this tour where he would play these marathon two or three-hour solo sets, sometimes reaching 30 songs or more. Ours was filled with him fighting with himself & his audience, an incredible array of radically vulnerable disclosures, wearing his mental health struggles up front. Right before the show started, I got some incredibly troubling personal news, & this show was all therapy for me even as Ryan treated his audience like his therapist.

Posted by Teacher Preacher at 8:01 AM