Tech’s Rendering of the Musical Ruthless: Ridiculous and Worth It 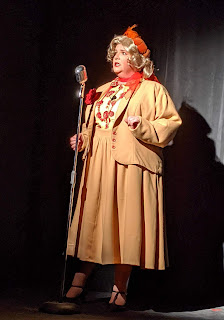 Opening the play on Halloween, with shows running through the Saturday of Homecoming weekend, Tennessee Tech’s Backdoor Playhouse unveils a spooky spoof, with director Mark Creter’s interpretation of Ruthless: The Stage Mother of All Musicals by Joel Paley and Marvin Laird. This madcap murderous musical mashup is sure to make most smile, if not make us a little bonkers in the process with all the plot twists and inside jokes.


Many of the amazing plays that Creter has staged in his decades at the helm of Tech’s theatre program have relied on an over-the-top degree of artifice, producing the kind of plays where you know that the playwright is messing with the audience, the kind of plays where the dramatic art-form tests its boundaries and the fourth wall wobbles and finally falls, leaving the audience members asking for more or asking what just happened.


Sometimes Creter experiments with drama, sometimes with comedy, and sometimes like now, with musical comedy. Ruthless fits right in Creter’s wonderfully weird wheelhouse, but in an entirely loony and light-hearted way. His musical director Mendy Richards, choreographer Megan Randolph, technical director Jeff Kean, stage manager James Alder, and the rest of the behind-the-scenes staff always deliver something strong, better than this cozy college town deserves. This show is a meditation on the idea of “talent” itself, but it helps that Creter’s cast overflows with talent.


A case in point of how crazy this play is and how great the cast are, this comes in the character of Lita Encore, played perfectly by Chelsea Holland  A theatre critic within the plot is not to be trusted, and Holland’s boisterous belting of the song “I Hate Musicals” makes its point clear. This play should not be taken too seriously; rather, it should not be taken seriously at all.


For all its stunning silliness, Ruthless offers wonderful commentary on the trickiness of talent and the snares of stardom, all behind the power of a predominantly female cast—even Playhouse regular Andrew Neal plays a female character.


The delightful yet disturbing mother-daughter dynamics between an excellent Erin Sullens and campy Caitlin McMahan as Judy and Tina Denmark are the core of the story. Samia Anderson’s sassy supporting part ends up playing a crucial pivot on which the entire plot turns, from slow-burn bizarre to completely batty.


There are so many twists and turns in Ruthless, and while we have tried to avoid spoilers here, even reading this review might elicit too much anticipation. Be warned: this is not a play where you need to suspend disbelief long enough to get looped in, but rather, this is a play where belief and disbelief should both be left in the car before crossing the threshold into the theatrical space. Ruthless is ruthless in how it renders expectations ridiculous. Go, laugh, and have a blast.


-this review has also been submitted to Cookeville's daily newspaper the Herald-Citizen.


Performances of Ruthless at the Backdoor Playhouse in the Jere Whitson Building at Tennessee Tech will begin on October 31 and continue November 1, 2, 4, 5, 8, and 9 at 8:00 p.m. ; with additional performances on Thursday, November 7 at 10:00 p.m. and a special matinee performance on November 9, at 2:00 p.m.; tickets are $15 general admission, $12 for senior citizens and $5 for all students; the box office opens at 7:15 and takes cash, checks and credit cards.
For further information call 931-372-6595 or visit our homepage at www.tntech.edu/bdph
Posted by Teacher Preacher at 2:01 PM